Bilbao and Bizkaia, outstanding in the transparency of their public institutions

The Historic Basque Territory of Bizkaia, and its capital, Bilbao, have received several awards and distinctions for their transparency, management, strategic planning, and economic efficacy. The outstanding management of funds and the zero debt achieved have enabled Bilbao City Council to win the European Public Sector Award EPSA 2011 for its public management policy based on economic rigour and strategic budgets.

The mayor of Bilbao in 2011, Iñaki Azkuna, recognised that  this award is “a great boost to our management” and means that from the outside “we are seen as a serious city”. “It’s important when you receive an award for economic rigour in Europe, particularly in times of crisis”.

The main objective is to ensure a project for the future that guarantees a good quality of life in the city, through the good management of public resources and good governance. And Bilbao has shown that it has more than achieved this.

This valuable award honours the work of Bilbao City Council at an international level, which has also been recognised by other distinctions such as being named the most transparent City/Town Council in Spain for the fourth year running, according to the Index of Town/City Council Transparency (ITA).

Another example of how the Council has also excelled in the transparency of its management is the smart city certificate, being the first public institution in Spain to be awarded this certificate, in 2015.

These are not the only awards achieved. In 2010, Bilbao won the Lee Kuan Yew World City Prize of 2011, considered the Noble Prize of Cities and awarded by the Urban Redevelopment Authority of Singapore, in collaboration with the Nobel foundation, in recognition of the profound urban transformation achieved from a post-industrial city to a metropolis through the organisation Bilbao Ría 2.000.

Singapore’s Prime Minister, Lee Kuan Yew, presented the award to Mayor Iñaki Azkuna. Bilbao was competing against 78 cities from all around the world.

Iñaki Azkuna also won the World Mayor Prize in 2012, awarded by the  City Mayors Foundation, for his work in Bilbao Council and in recognition of the urban transformation achieved by the city in recent years. The transparency of the local government and the economic management carried out in recent years in Bilbao also played an important role in the awarding of this prize.

At the awards ceremony, Azkuna said that Bilbao’s transformation is due, above all, to the “patience, perseverance and tenacity” of the people of Bilbao; it has been “tricky” turning this industrial city into somewhere that is “clean, more transparent, and service-oriented”.

As for the award presented by the City Mayors Foundation in recognition of the mayor’s management, Azkuna stated that he has endeavoured to make Bilbao “as transparent as possible”, highlighting the achievement of bringing the city’s debt down to zero. “We have had a few fiscally good years and we have gradually repaid our debts, which has gone well for us”, he said.

We should also remember that in 2011 Bilbao was one of the three finalists aspiring to be the World Design Capital 2014 (WDC 2014), competing against 56 cities from 24 countries. In the end the award went to Cape Town (South Africa).

The City Council is not the only award-winning institution. The Provincial Council of Bizkaia heads the Transparency Index of Provincial Councils INDIP 2015 together with the councils of Huelva, Palencia, Tarragona and Valladolid and has scored 100 out of 100 possible points.

The INDIP is produced by Transparency International Spain to measure, through 80 indicators, the level of transparency of 45 councils in the State, including the councils of the Basque Country, the Balearic Islands and the Canary Islands. 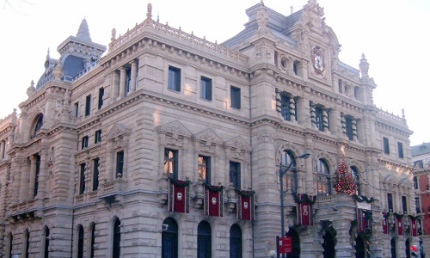