The President of the Provincial Council oif, Unai Rementeria, presents Bizkaia as the gateway to Europe to 75 entrepreneurs from Idaho 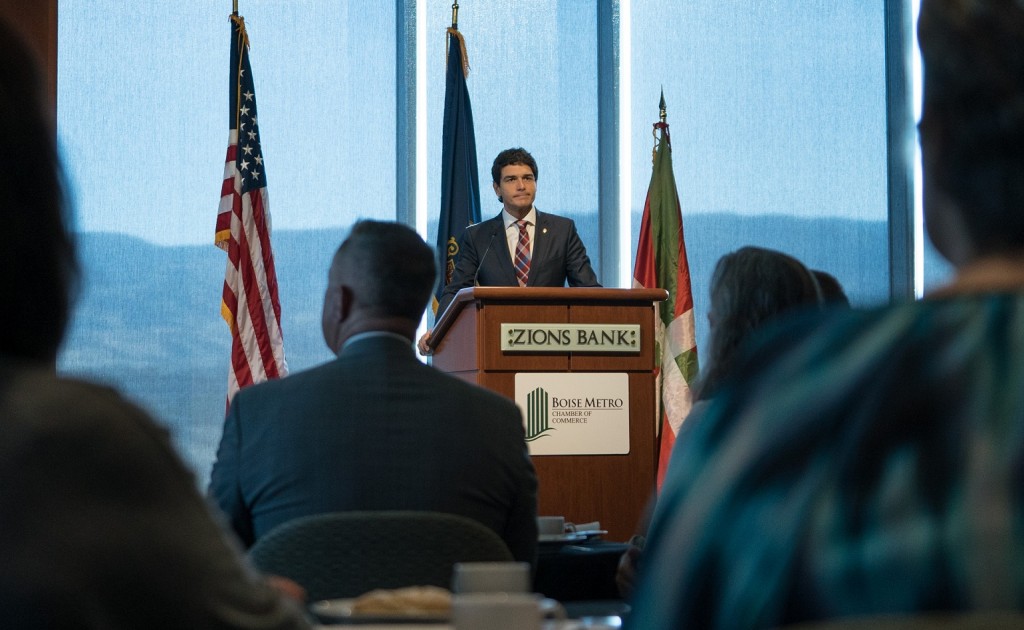 At a work meeting in the Chamber of Commerce of Idaho, the President of the Provincial Council talked about the opportunities offered by the Territory to make investments and the specific features and advantages provided by self-government and  its having its own taxation system.

Bay of Biscay is a perfect gateway to Europe. With this statement, which is an invitation, the President of the Provincial Council, Unai Rementeria, presented Bizkaia as the gateway to Europe to 75 entrepreneurs in the Chamber of Commerce of Idaho in July. In his commitment to open Bizkaia to the world, Rementeria described the Territory as an attractive place to make investments and carry out projects thanks to self-government and its having its own taxation system. He highlighted stability as one of the main virtues for investors. The main virtue of Bizkaia is political stability. We are a stable government. Bizkaia and the Government of Bizkaia guarantee absolute institutional, political and economic stability, he pointed out.

Bizkaia has excellent international connections by air, sea, rail and road. We are hardly two hours away from the main European financial capitals, such as London, Frankfurt or Paris. And the Port of Bilbao is connected with 900 ports all over the world; it is the largest Atlantic port in Southern Europe, Rementeria explained to the entrepreneurs from Idaho when presenting Bizkaia as an unbeatable gateway to the European market for their products. Moreover, he insisted that it is an attractive territory for investment, since it offers incentives for the development of new projects, especially those which are technology-based, and that the institutions of Bizkaia provide these projects with locations adapted to their needs as well as guidance or access to seed capital and support programmes.

Rementeria stood back from other less stable productive models and underlined that the Basque region is one of the most competitive regions in Europe, with industry representing 23% of the GDP and including sectors which are considered to be strategic, such as energy -which represents 7.5% of the GDP and employs 68,000 people in 350 companies-, the automotive sector –with a large number of internationally renowned part manufacturers and top car manufacturers such as Mercedes Benz and Irizar- or machine-tool –we are the third main producer in the European Union and our machine-tool sector is characterized by its international prestige and innovative nature -.

The commitment to innovation and the technological potential of Bizkaia in strategic sectors such as energy, aeronautics or the automotive sector have caught the attention of the entrepreneurs from Idaho. “It is a really interesting find for us”, assured Jim Riley, the owner of Riley and Associates, a company in the timber industry established in the north of the state. “I am impressed by what Rementeria has shown to us. We have been given a first-hand insight into what Bizkaia is and what it offers”.

And as a matter of fact, its innovative and technological capacity in important sectors such as energy or aeronautics, which are also very important in Idaho, is surprising. It is an interesting first contact. I think there are reasons to think that it is possible to move forward and seek collaboration between companies from Bizkaia and from here. But it is necessary to work hard, to pin down that relation, what can be of interest for ones and for others, the needs and the way to carry it out. There is still a lot to do, but it is a good starting point,  Riley said to the entrepreneurs from Idaho, who were also pleasantly surprised at the professionalism, the high qualifications of the population (the ratio of engineers is the highest in Europe) and the commitment of Bizkaia to nurturing,  caring for and attracting talent.

In this regard, the President of the Provincial Council pointed out that 46% of the population have a university degree, whereas the average in Europe is 24%, and that the Council promotes programmes which facilitate the hiring, promotion and integration of researchers in Bizkaia.

He also reminded them that an agreement has been concluded with the Pete Cenarrusa Foundation to exchange talent. This agreement is framed within the so-called Basque-American Talent & Leadership Route programme and intends to be a development platform to know the business, scientific, technological, institutional and cultural reality of the Basque Country and North America in order to build bridges and tighten the link of highly-qualified people with high professional growth potential from both territories. 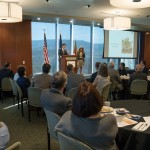 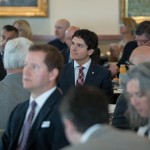