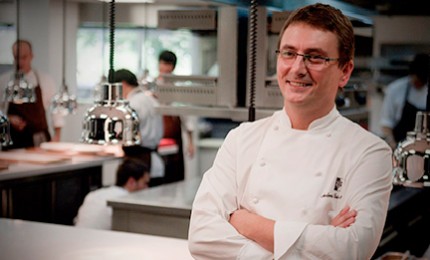 Andoni Luis Aduriz was born in 1971 in San Sebastian, Basque Country. He is a renowned chef.

He started his professional career in the kitchen of a pizzeria, as a weekend or holiday job while he was a student. After completing his studies at the Catering School of San Sebastian, he worked with Ramón Roteta, Hilario Arbelaitz, Jean Louis Neichel, Juan Mari Arzak, Fermín Arrambide and Pedro Subijana among others. In 1993 and 1994 he was a member of the team of El Bulli, managed by Ferran Adriá. In 1996 he was Head Chef with Martín Berasategui. In 1998 he started working by himself at Mugaritz, the restaurant he has managed since then and which has received various prizes and awards. Andoni Luis is a clear disciple of Ferran Adrià’s. He has been developing his own peculiar cuisine to which he adds, among other things, a great deal of flowers and wild plants as a result of his passion for botany, as well as an interest in literature and plastic arts.

The restaurant in Errenteria, Mugaritz, with two Michelin stars, headed by Andoni Luis Aduriz, is still among the top ten of the world’s elite, after revalidating in 2015 in London the sixth position in the list of the 50 best restaurants in the world published by the famous Restaurant magazine.