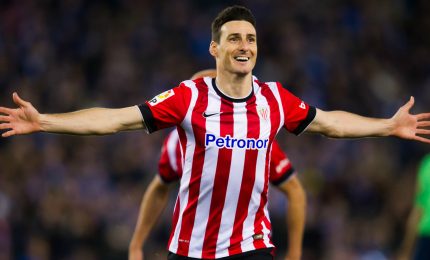 Aritz Aduriz was born in Donostia-San Sebastian in 1981. He loved sport: he played football and practiced skiing, canoeing and surfing. His parents were ski instructors and at the age of 9 he was cross-country ski sub-champion of Spain, although he finally decided to devote himself to football. He started playing in 1994 at the Antiguoko, a football team from his city, where he played in the Under 14, Under 16 and Under 18 categories. En 1999, after finishing the year as the top scorer (with 33 goals), Aduriz made his debut in senior football with the humble Aurrerá of Vitoria. After one season, Aduriz was definitely signed by Athletic Club and became part of its reserve team in the summer of 2000.

Up to now, Aduriz has played a total of 566 matches, 9 of them international, and has managed to score a total of 226 goals since the 2002 season. In his track record is the Supercup of Spain 2015-2016 with Athletic Club of Bilbao.