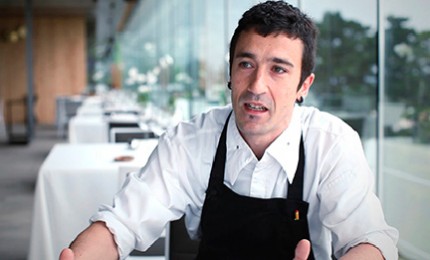 Eneko Atxa Azurmendi was born in 1977 (aged 38) in Amorebieta-Zornotza, Basque Country). He is an outstanding Basque chef.

He studied at the Catering School of Leioa in the Basque Country. Then he worked for various restaurants in the Basque Country, such as Baserri Maitea, Asador Zaldua, Andra Mari in Galdakao, Martin Berasategui’s restaurant, Mugaritz, Etxebarri in Axpe, etc. He has won the Spanish Signature Cuisine for Young Chefs competition, was named best chef of the year by the prestigious French Gourmet Club Fourchettes, and has been nominated for the Pil-Pil prize to the most innovative technique.

He manages the 3-Michellin star restaurant “Azurmendi”, in Larrabetzu, on the outskirts of Bilbao. AZURMENDI has also received the following awards: It ranks 19th according to Restaurant magazine and it received the award to the Most Sustainable Restaurant in the World in 2014, according to The World´s 50 Best; furthermore, it is considered to be the Best Restaurant in Europe 2015, according to the prestigious guide OAD (Opinionated About Dining). Moreover, it has been ranked number 2 in the world by the prestigious ELITE TRAVELER magazine, only surpassed by Grant Achatz’s Alinea Restaurant.

ELITE TRAVELER is a magazine on luxury and lifestyle which has been publishing its own ranking of the 100 Best Restaurants in the world since 2013. The list is based on the votes of the readers. AZURMENDI ranked third last year and Atxa was elected “Best Young Chef 2015” and in 2016 it is standing as the second best restaurant in the world.

His main features are the creation of new dishes, the research into new scents and the recreation of atmospheres for the diner. He is committed to natural cuisine but with personality and with an atmosphere which identifies the dish with the origin of the product. His dishes swing between traditional Basque cuisine as a basis and the continuous creative evolution. This is why he considers his mother and grandmother as his teachers, as well as the chefs Martin Berasategui, Juan Mari Arzak and Ferran Adriá.

2016 is being a good year for Eneko Atxa since he will open a new complex in London in summer which will bear his name, “Eneko”, inside the prestigious 5-star hotel One Aldwych in Covent Garden.