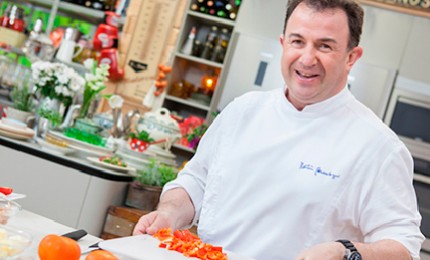 Martin Berasategi “The master of the Michelin stars”

Martin Berasategui Olazábal was born on 27 April 1960 in San Sebastian. He studied at Padres Capuchinos School in Lekaroz, Baztan Valley (Navarre). At the age of thirteen he started working in the family restaurant, Bodegón Alejandro.

In 1979, he began to study catering at the Ecole Nationale Supérieure de Pâtisserie of Yssingeaux, where he met various international chefs. In 1981 he took charge of Bodegón Alejandro, which received its first Michelin star in 1986. In 1993 he opened his first restaurant, called “Martín Berasategui”, in Lasarte-Oria.

In three years the restaurant received two Michelin stars. Since then, the chef has received various awards, such as the Basque Gastronomy Prize to the Best Chef of the Basque Country in 1998 and the Gold Drum of San Sebastian in 2005. In 1996, the chef decided to create a business association, the Martin Berasategui Group, to take charge of restaurants such as Bodegón Alejandro; the restaurant in the Guggenheim Museum of Bilbao or the Kursaal Martín Berasategui with 3 Michelin stars.