The Automotive Sector, strategic in the Basque economy

The automotive sector and the Basque Country form an important partnership which has worked together for years. Its huge development means that there is a wide range of companies (almost three hundred) related to the automotive industry sector, manufacturing a third of all components in Spain, along with two important manufacturers: Mercedes Benz in Vitoria-Gasteiz and Irizar Group with its headquarters in Ormaiztegi, Gipuzkoa. This large concentration in a small region like the Basque Country is only comparable to that of some German Länders, or German federal states.

The sector has become one of the strategic sectors of the Basque economy in addition to the energy and aeronautical sectors. It has contributed, along with steel, to maintaining the important weight of industry in the GDP of the Basque Autonomous Community: 24% in 2013 (not including data for the Mercedes plant in Vitoria-Gasteiz).

In 2013, the automobile segment invoiced 13.071 billion Euros in the Basque Country, up 5.2% on 2012, when it reached 12.4 billion Euros, and 2 billion more than before the crisis. These figures have made it one of the main drivers of the Basque economy.

Data for recent years place the weight of the Basque automotive industry at 17% of the GDP for the Basque Country, 20% if we add figures for Mercedes Benz in Vitoria-Gasteiz. 90% of automobile turnover in the Basque Country is exported, which contributes to the Basque trade surplus, more than half goes outside Europe, and offers employment to around 35,000 people in the Basque Historical Territories of Bizkaia, Gipuzkoa and Alava.

Keys of the Sector

The good health of the Basque automotive sector is due to more favourable international economic prospects, the increase in the sale of vehicles in the Basque Country (18.4% increase in registrations in 2014), the good performance of the sector worldwide and the recovery of the European market.

Along with external factors, its own elements must be added, hallmarks of the Basque automobile industry which explain its leading role worldwide.

There are also two leading manufacturers: Mercedes Benz in Vitoria-Gasteiz, part of the German Daimler Group, which, in good years, exceeds 100,000 units, employs 3,500 people and represents 7.4% of total exports in the Basque Country. Daimler will invest 500 million Euros in its new van models, of which almost 200 million will go to the Vitoria-Gasteiz plant, guaranteeing activity in the Alava company for the next fifteen years.

The Irizar Group is a worldwide reference in the manufacture of top of the range buses and coaches. With 125 years of experience, it employs over 3,500 people at its factories and production plants in the Basque Country, Spain, Mexico, Brazil, Morocco, South Africa and India. In 2013, it achieved record turnover of 556 million Euros, with the production of 5,368 coaches, of which 2,988 were top of the range. One of the keys of the Irizar Group is its globalisation, as almost half its turnover, 48%, comes from its external plants.

These factors have made the Basque Country a national, European and worldwide reference in the automobile industry. It is a model recognised by the German newspaper, Süddeutsche Zeitung which wrote a series of reports on the Basque automotive sector three years ago.  It praised its innovative nature, the importance of the components industry, its consolidation capacity in emerging markets and its specialisation as a competitive advantage, which is similar to North Rhine-Westphalia.

The Basque Automotive Components Industries Cluster Association (ACICAE) has played a key role in the national and international prestige that the Basque automotive sector and its auxiliary industries have acquired. Founded in 1993 with the support of the Basque Government, it was one of the first clusters to be set up in Europe.

The Automotive Cluster of the Basque Country is a non-profit making business association that was set up to improve the competitiveness of the automotive industry in the Basque Country. Over its two decades of life, it has evolved rapidly, going from its initial twelve companies to over 150 members today. Almost half of them are located in Bizkaia. 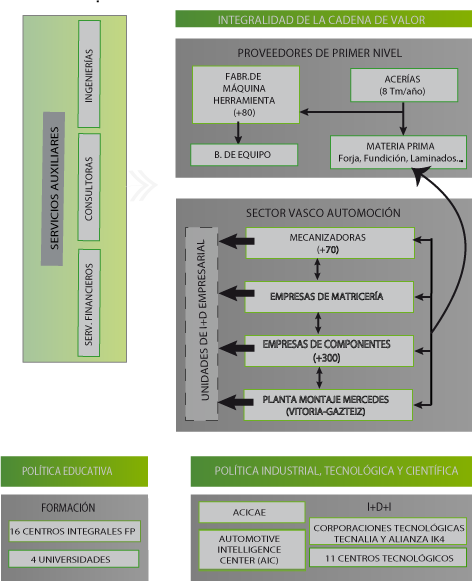 ACICAE has been involved in the huge growth of the Basque automotive sector in recent years and the importance it has acquired. Its contribution has been vital to the four-fold increase in its turnover over the past fifteen years and to its becoming one of the sectors that drives the Basque economy today.

Optimism for the Future

Faced with important challenges, the automobile sector in the Basque Country is strongly consolidated and looking towards competitiveness and innovation which make it see the future with optimism. Over the next five years, the worldwide sector is expected to grow by almost 20%.

Therefore, the prospects for 2015 are positive for a growing sector, which is strategic within the Basque economy and backed by improved economic figures.

Forecasts support the Main Economic Features of 2014 and Prospects for 2015 study by Confebask. According to the Basque union, the sector outside the Basque Country will increase its contribution slightly with the growth of exports.