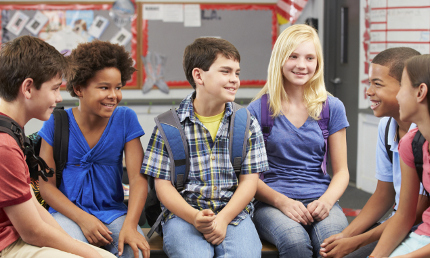 The importance gained by plurilingualism and the study of languages in general in Basque society over the past decade is clear, not only the world of work, since today it is almost an essential requirement to secure a job in the administration, in multinational firms, in technology companies etc., but also in the social sphere, in the day-to-day living of citizens in the Basque Country.

The boom in tourism in the three historical territories, the spread of the Internet and new technologies, the availability of media in other languages, and the implementation of trilingual education systems (Basque, English, and Spanish), among other factors, have fostered an increase in the number of citizens looking to learn one or more languages.

The first language that the Basque people are concerned to protect and preserve is their own language: Euskera, an ancestral language that currently occupies a major place in society. This statement is supported by the statistical data taken from Eustat for 2010/2011, stating that 60% of school pupils were studying model D at school(entirely in Euskera), and a further 22% were studying model B (half Euskera, half Spanish). And this choice can be found at a very early age: in Early Years Education, 73% of children were learning in Euskera (model D), and a further 23% in Euskera-Spanish (model B). This shows that Euskera is very much alive as a language, and can look forward to a very bright future.

Statistics for school activity in the Basque Country in 2010-2011 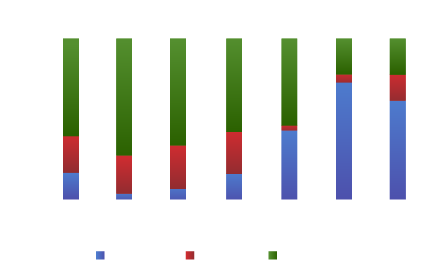 Model A: Spanish as the working language.

Model B: Equal proportion between Euskera (Basque language) and Spanish.

According to the findings of the Language Rich Europe study, around37% of the Basque population is bilingual (Euskera and Spanish), whereas 22% have at least an intermediate knowledge of English, 9% can communicate in French and 4% can understand German or Italian.

As for the most commonly spoken and studied foreign language in the Basque Country, according to the EF EPI English Proficiency Index,the inhabitants of the Basque Country have the highest level of English in the Spanish State (with 57.90 points). 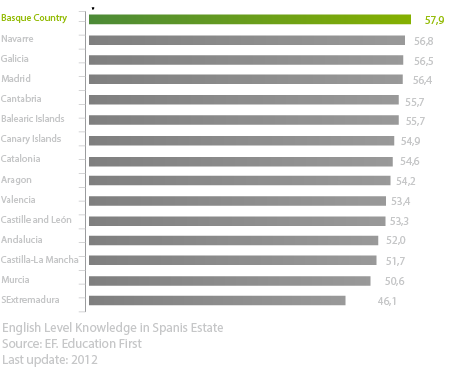 Compaired with other European countries with regard to English knowledge, the Basque Country is in the middle of the table, at the same level of countries as Germany or Switzerland. 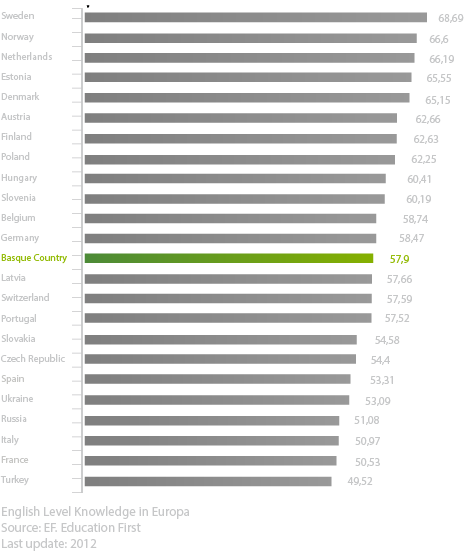 In this respect, Official Language Schools, or Escuelas Oficiales de Idiomas (EOI) have played a major role in terms of channelling the interests of Basque citizens in learning other languages. In 2013, the 14 EOI schools located in the Basque Country offered 31,797 places, and the possibility of studying eight languages (14,693 places for English, 7,306 for Euskera, 5,964 for French, 2,491 for German, 558 for Spanish, 495 for Italian, 170 for Portuguese, and 120 for Russian). There is a high demand for these places among the population; in fact nine out of every ten enrolments on special education courses in 2010-11 were at EOI schools, since they offer a high level of education and an official qualification.

The growing interest in a multi-lingual education, from primary school age, can be seen most clearly in the setting up of foreign schools in the Basque Country. The main characteristic of these schools is their use of a foreign language as the working language. These schools include the St. George English School (Leioa), the American School of Bilbao(Berango), Deutsche Schule Bilbao (Bilbao) and the French Lycée(Zamudio), in Bizkaia, as well as St. Patrick and the Deutsche Schule San Alberto Magno, both in Donosti.

Furthermore, with regard to private and grant-maintained schools (which are funded through a mixture of public and private sources), the i2n study carried out by EF Education First (international education company specialising in teaching languages abroad) highlighted the level of English offered by schools in the Basque Country as being one of the highest in the Spanish state. Four schools – three in Bizkaia and one in Álava/Araba – are among the top 20.

With the explosion of ICTs, on-line courses and continual learninghave been growing in popularity, and this approach has become very important in language learning. One major initiative is Hiru, the Basque education web portal that provides public education services over the Internet, offering citizens the e-LEA programme to learn English, French, German, and Italian, with a view to providing all Basque citizens with access to language learning.

The Basque Country shows a great willingness to open itself up to the world through language, which is why its citizens are working todevelop a multilingual profile which is already strong in primary and secondary education. Multilingualism is forging a path for itself very quickly in higher education, public services, private enterprise, etc., which is even further strengthened by an educational foundation working towards achieving this challenge.