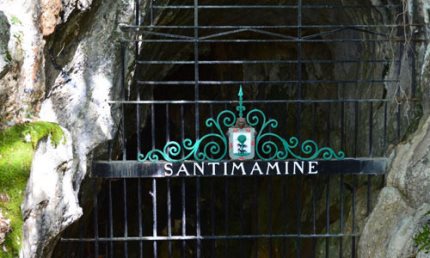 World Heritage in the Basque Country

The Basque Country is home to four different World Heritage Sites: the Hanging Bridge of Bizkaia and the rock caves of Altxerri, Ekain and Santimamiñe. The fifth of the Basque sites to be recognised by UNESCO is the Urdaibai estuary, although in this case not as a World Heritage Site, but as a Biosphere Reserve, declared in 1984.

UNESCO (United Nations Organization for Education, Science and Culture) has been working since 1972 to ensure the protection and conservation of the world’s cultural and natural heritage. Since then, it has held its Convention on the protection of world cultural and natural heritage at which, if a place or monument is considered especially valuable for humanity, it is named a World Heritage Site.

A place with exceptional universal value, when named a World Heritage Site, becomes a protected legacy, which we have received from the past and which we must conserve and safeguard for future generations.

Deba, Mutriku and Zumaia are to be congratulated. The Basque Coast Geopark is already a member of the Unesco network. This was unanimously ratified by the General Assembly, gathered in Paris in November 2015 on the occasion of the 38th General Conference, where the creation of an International Geosciences and Geoparks Programme was given the green light. It will comprise the existing 120 geoparks, including the Basque park as well as ten other parks from the Spanish state. 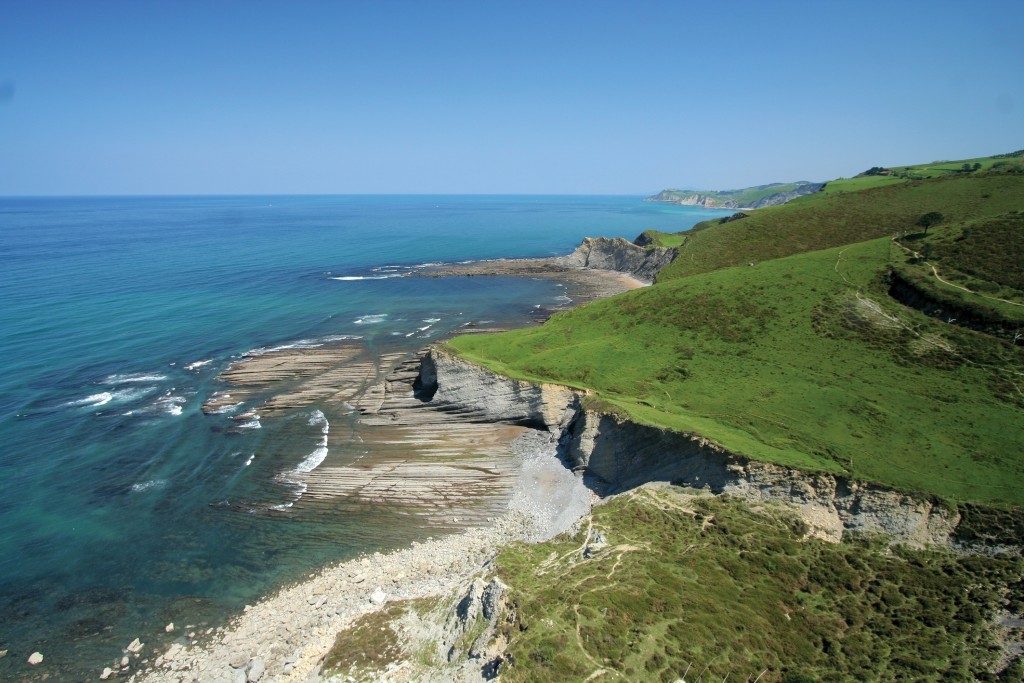 The Hanging Bridge of Bizkaia is a suspension bridge that crosses the Nervión Estuary, joining the localities of Portugalete and Getxo in Bizkaia. It is the oldest transporter bridge in the world is continues to operate every day. Six million passengers use this suspension bridge every year when crossing the estuary. 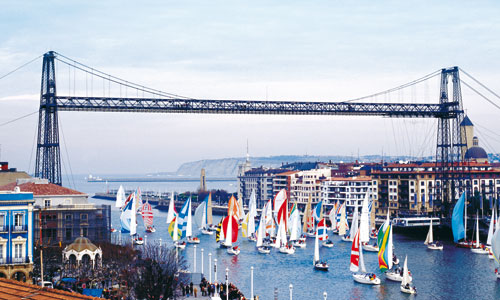 It first opened in 1893 and was designed by the architect Alberto de Palacio. Declared a World Heritage Site by UNESCO in July of 2006, it was the first Industrial Historic Asset declared in Spain and the first cultural or natural asset honoured with this distinction in the Basque Country. It is considered one of the most representative metallic architectural constructions of the Industrial Revolution and was declared universal heritage on the grounds that it is “an exceptional expression of technical creativity, a perfect combination of functionality and aesthetic beauty”.

Located in the area of Busturialdea, Urdaibai is a natural jewelset in the heart of Bizkaia. One of the most important wetlands in Europe and home to an extraordinary diversity and richness of landscape and ecology.

22,000 hectares stretch out over the Gernika Estuary to create a unique natural space, which is home to invaluable biological riches, numerous ecosystems, and unique communities of fauna and vegetation with very important species. From the coastal cliffs and beaches, to the woodlands, forest and rivers further inland, the marshlands and river plains, and not forgetting the numerous archaeological sites and historical vestiges it possesses.

It was declared a Biosphere Reserve over 20 years ago, and it continues to prioritise the conservation of its natural systems and biological diversity, as well as the rational use of its resources. 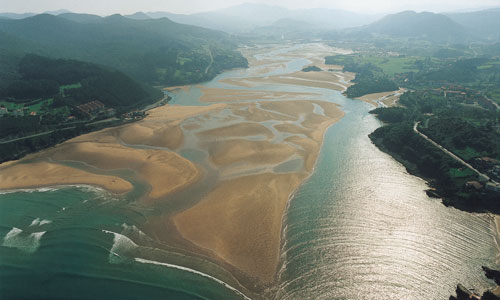 The Santimamiñe Cave, located in an incomparable setting, on the east bank of the Urdaibai river basin (Bizkaia), on the southern slopes of Mount Ereñozar, was a major point of reference for much of last century. For nine decades, successive generations from Bizkaia visited its galleries and marvelled at its rock paintings and engravings, although this cave, like the previous ones, has been closed to the public since 2006 owing to the protection and conservation programme for the paintings.

However, you can still go on a guided tour, lasting an hour and a half, accessing the vestibule through the entry to the cave so you can see the archaeological excavation work being carried out. The cave is home to traces of human settlements dating back over 14,000 years, and it is the most important archaeological site in Bizkaia. The rock painting rooms cannot be visited.

After your visit, if you go to the San Mamés hermitage, which has been turned into an intepretation centre, you can discover the inside of the cave thanks to a sophisticated 3D virtual tour, which includes the famous rock paintings, discovered in 1916 through the curiosity of a group of lads.

These paintings, of which there are around 50, painted in charchoal and/or etched, date from th Magdalenian period of the Upper Palaeolithic (13,000 B.C.), and they depict different animals: thirty-two bison, seven goats, six horses, one brown bear, a crow, and incomplete remains of other figures. 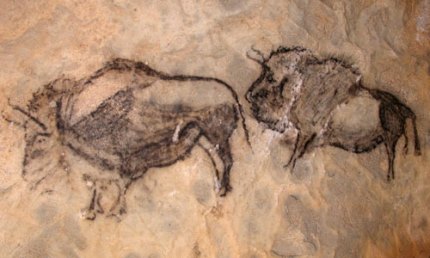 The cave also possesses great geological beauty, a large number of stalagmite and stalactite formations, which sometimes join up to create magnificent columns.

Located at the foot of the eastern slopes of Mount Beobategaña, in Aia (Gipuzkoa), the Altxerri cave contains rock engravings and paintings from the Magdalenian era, between 13,000 B.C. and 12,000 B.C.

The cave is home to engravings and paintings depicting a wide variety of animal species. The engravings have been well conserved but the paintings have deteriorated greatly through humidity. For this reason, and because the layout of the cave makes it difficult to move through it, this cave has always been closed to the public, making it one of the least well-known of the three caves in the Basque Country.

The cave paintings were discovered by three students who, on the 28th October 1962, when they were preparing to climb down a pothole that had been opened up in 1956 by an explosion in a quarry, observed black lines on the wall close to the pothole, making the figure of a bison. After that, they discovered other groups of figures in other parts of the cave.

The figures depicted are of different types of animals: some are common to all sanctuaries, such as the horse, the bison, and the goat, but others are fairly uncommon (snake), and others have not been found in any other cave in the Basque Country, such as the raindeer, the saiga antelope, the wolverine, and the artic hare. The anthropomorphic figure is also unknown.

This cave is home to one of the biggest cave paintings in Europe, an enormous bison, drawn in red and spanning 5 metres, which is also one of the few colour figures in this cave, since black is the predominant colour used.

In the Sastarrain cave in Zestoa (Gipuzkoa), where human settlements date back 13,000 years, we find one of the most important pre-historic sanctuaries in Europe. It was discovered in 1969 and contains 70 rock figures: 64 of them are painted and 6 are engraved. The first figure, a large horse’s head, is around 50 metres from the entrance to the cave, and the last figures are over 150 metres inside.

Ekain is home to one of the most beautiful horse scenes in Franco-Cantabrian parietal art. The figures appear to form a single scene, with great care taken not to overlap them, which is not seen in many other Palaeolithic art panels.

As well as horses, there are also depictions of other animals such as salmon, bison, bears, deer, and goats. The predominant colours used are ochre and black.

The Aranzadi Science Society, which has protected the Pre-Historic Heritage of Gipuzkoa since it was founded in 1947, has had a difficult time conserving this extraordinary Heritage. Since then, it has worked hard to safeguard this magnificent place, which is why the cave is still as it was discovered and as it had been for many centuries.

For that reason, the cave cannot be visited, but a reconstruction has been created, Ekainberri, located 600 metres from the town of Zestoa, very close to the original cave. Thanks to this replica, which has been visited by 170,000 people in the five years it has been open,we can discover, know, and feel this Basque Palaeolithic artistic legacy, declared a World Heritage Site by UNESCO in 13th August 2008.