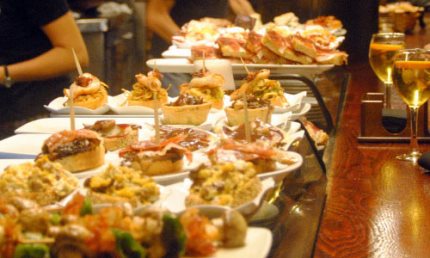 The Basque Country can boast of a great variety of fantastic foods. Many a culinary critic believe this is so and the Michelin guide is no exception: four restaurants based in the Basque Country have been awarded the coveted stars for excellence. As many as 28 stars were received by 19 restaurants across the three Historical Territories.

In our region, you can eat very well out of counter dining. What we callpoteo or txikiteo is well-rooted in our eating-out tradition. It consists in going out with friends from bar to bar, drinking a small glass oftxakoli wine (txikito) or beer (zurito). This convivial culinary ritual includes food in the form of small bites or pintxos.

Pintxos are true culinary treasures in the Basque gastronomic DNA. They are finger-food bites prepared with typical local products: hake, cod, anchovies, baby squid, mushrooms, etc. Although somepintxos may seem simple at a glance (stuffed bell peppers, croquettes or the ever-present tortilla de patatas) others have grown into more refined versions that can be considered as bite-size haute cuisine.

The new culinary trends leading to more inventive, new-wave pintxos is by courtesy of young Basque chefs who have studied in leading culinary schools, worked in restaurants across the Basque Country, and become culinary artists whose creations include increasingly sophisticated pintxos. They encourage ongoing innovation and the introduction of new miniature specialties that cover the bar counters with a symphony of exquisite flavours. Currently, traditional and newly created pintxos come together to please the most discriminating taste buds.

Long ago, a pintxo was a small slice of bread with a small amount of food on top, held together by a toothpick. Today, not all pintxos look this way.

Unlike tapas, which in some bars in the Spanish state accompany the drink you order and are included in the price, Basque pintxos are ordered separately. The bar in a pintxo establishment is packed with a wide variety of such small portions of food, filling the place with colours, flavours and smells. A joyful atmosphere is what characterises this type of bars, which invite visitors to try authenticBasque small-size culinary delights and mingle with local patrons. A mix of leisure and local culture in every bite.

More often than not, you will see a customer pick a pintxo from the bar themselves, hold it with a napkin and then savour it standing by the bar while chatting casually with friends. You may be one of those who’d rather sit at a table at a quieter corner of the bar to be served by a waiter, especially if you order a hot pintxo, which must be warmed up before it is presented to you.

All the Basque capitals, and most small towns too, have pintxo bars which sit close to one another in certain areas, especially in the Old Towns. Walking the streets in any Old Town and coming into a pintxo bar can make a yummy experience. Bon appétit!