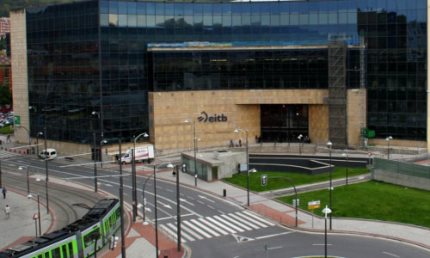 Commitment to promote and protect the Basque culture has always been constant in the Basque Country. The institutions have striven to preserve the Basque hallmarks, and for this reason, theBasque Parliament  unanimously approved the Law on the creation of  Euskal Irrati Telebista (EiTB), the Basque Television, on 20th May 1982, which came about with the aim ofinforming and contributing to the development of Basque.

In over 30 years of history, EiTB has been consolidated and has evolved to become the  leading communication group in the Basque Country, made up of six television channels, five radio stations and a website, whereby it is one of the media groups with the highest audiences in the three Historical Territories of Bizkaia, Gipuzkoa and Álava-Araba.

Euskal Telebista (ETB1) began broadcasting on  31st December 1982, soon after the launch of Euskadi Irratia – the group’s pioneering radio station -, on 23rd November. EiTB began broadcasting entirely in Basque, an unmistakable indication of its vocation towards the  normalisation of the use of the Basque language, and a few years later, on 31st May 1986, ETB2 went on the air, another example of the plural character with which it was born, and with which it began broadcasting in Spanish.

In addition to its two ‘flagships’, the group has ETBSat and Canal Vasco, which act as bridges  between Basque communities resident in other countries, ETB3; channel aimed particularly at children and young people, and ETBK; which offers sports contents with extensive coverage of  ‘herri kirolak’ or traditional Basque sports.

Another important part of the group are its radio stations: Euskadi Irratia, Radio Euskadi, Radio Vitoria, Gaztea and EiTB Musika, which have a marked local and close accent, and make up a wide range of genres and styles for users to choose from in Basque and Spanish.

Similarly, the infinite world of possibilities that Internet has opened for the media world must be pointed out, particularly in the section referring to the interactivity of spectators/listeners… Eitb.com is the group’s firm commitment in this respect,  a website in which audiovisual contents are the ‘highlight’ and are combined with blogs, social networks, user participation and absolute freedom in selection through the  customised eitb channel. Furthermore, it is one of the group’s most popular media, with over 1,330,000 unique users (September 2014) according to the audit carried out by the  Circulation Statistics Office (OJD).

The headquarters of the EiTB Group was initially located in Iurreta(Durango) and in 2007, it moved to the spacious and modern building in Bilbao, which is home to several of the group’s companies (Eusko Irratia, ETB and EITBNET). The space occupied by the headquarters of Basque television belonged to another icon of the city of Bilbao: the Bilbao Trade Fair, and specifically in pavilions 7 and 8.

In total, it occupies 31,000 square metres and is divided into different areas in which an open plan design with glass partitions has been sought. “Contents creation” can be highlighted with a surface area of 3,000 square metres in which over 300 people can work at the same time, the largest in Spain. 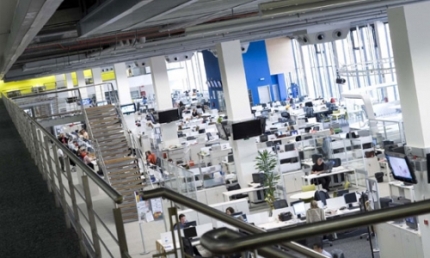 EiTB is looking toward the future with the same values and principles with which it was born, whilst considering reforms to face the challenges of the future. The Basque communication group is committed to its strategic bid for own production, as shown in the Strategic Plan 2013-2016, and projects a boost to channels in Basque.

Its strategies offer greater visibility of Basque in the media whose working language is Spanish, to achieve a 10% annual increase in the Basque-speaking audience in the accumulated consumption of contents in Basque.

Furthermore, after three year of restructuring in search of greater efficiency, EiTB has reached the status of a solid and sustainable project, whereby it is an incomparable instrument to promote social cohesion,  the  normalisation of Basque and the promotion of the Basque culture and economy.