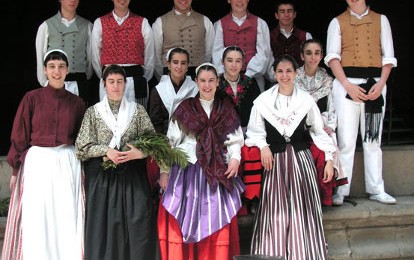 Unlike other regions, the Basque Country does not have a single traditional costume. Nor is there a single costume for each of the Historical Territories (Bizkaia, Gipuzkoa or Álava, for example). Instead, there is a wide array of garments whose features vary greatly depending on age, gender or area, even within a single Historical Territory. Therefore, there is no reason to speak of a traditional costume but rather of traditional Basque ways of dressing.

About a century ago, the typical outfits worn by peasants, fishermen or workers with little change for years began to disappear. With the arrival of industrialisation, clothes were made in manufacturing plants at lower prices, so virtually everyone could buy ready-made clothing.

The young members of the family left the baserris (traditional farmhouses) to work in industrial factories and began wearing streetwear in urban environments, leaving traditions aside. The elderly still wore traditional clothing but the youth adopted a new way of dressing. Thus, the rural areas and the baserritarras (baserri dwellers) became the guardians of the Basque traditional cultural heritage. Their costumes were symbols of values that were vanishing and represented what has come to be known as the traditional Basque outfit.

On special occasions or festivals, the youth would dress to look like genuine baserritarras, borrowing traditional clothes from old people or having them sewn in the old traditional way. They did not mean to wear them as fancy dresses but to celebrate the Basque heritage. With time, this customary practice spread all over and become a tradition. Today, people wear traditional attires in the festivals held throughout the year in all towns and villages in the Basque Country.

Traditional Basque outfits consist of a wide array of robes that are similar in style and have elements in common: long skirts and a zapi (kerchief) covering the head for women; for men, long trousers, a loose blouse or shirt and a txapela (beret). The footwear for both men and women consists of abarkas (laced shoes), or abarketas or espartinas (espadrilles).