The Basque Country heads the expenditure per student among the regions, spending nearly 4,000 Euros more per student in the state network than the average in the Spanish state

The Basque Country is still the autonomous community that invests the most per student and the community which allocates the most from the education budget to grants. This is what is depicted in the report “The figures of education in Spain”, which has just been published by the Ministry of Education. It states that the expenditure per student in the Basque state school is 3,712 Euros above the average expenditure in the State. To be precise, during the year 2012-2013, the investment per student rose to 9,143 Euros, as opposed to the average of 5,431 Euros. Furthermore, the economic effort made by the Basque Government doubles the investment per student of two autonomous communities as different as Andalusia and Madrid.

The report reveals that the Basque educational system is resisting the blows of the crisis better than other areas.

According to the data of the Ministry, staff and education agreements and subsidies to private schools took up 84% of the budget allocated to non-university education, 2.34 million Euros. To be precise, 53% went to teachers’ salaries and 31.3% to private schools subsidized by the state. 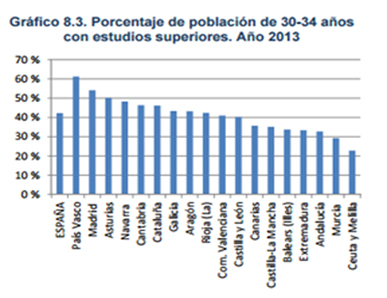 This network of centres is in a very solid position if compared to the distribution of expenditure in the State, where the average investment was 19.6%.

On the other hand, during the crisis, the Basque Government has maintained its commitment to equal opportunities. In 2012 it was one of communities which awarded the most grants. The Basque autonomous community is the community which allocated the most funds to grants (4%), twice as much as Andalusia. According to the data of the Ministry, Lakua allocated 76.5 million Euros to study grants (44.3 for Pre-School to Compulsory Secondary Education; 6.9 million for Post-Compulsory Education; and 25.3 million for University Education. Most of the grants for Compulsory Secondary education went to the canteen, 33.5% million Euros, and 9.2 million to textbooks. 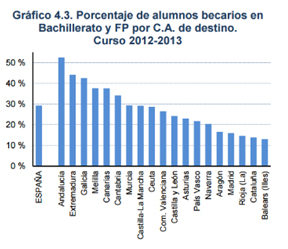 Altogether, 107,257 grants were distributed in this cycle and 15,524 in the post-compulsory stage, nearly half of them in Post-compulsory Secondary Education (49%), benefiting 27% of the students.

In the case of vocational training, the aid amounted to 16.9%.

As a whole, the Basque Administrations invested nearly 30 million in subsidizing University education (25.3 million for the UPV/EHU, 2.6 million for the University of Deusto and 1.4 million for Mondragon University). Deusto is the private academic institution with the largest number of grant holders, 24%, as opposed to 22% in Mondragon.