The study made on the survey carried out annually by the Basque Country’s Technology Parks (the Araba, Bizkaia and Gipuzkoa parks) of the firms on site, 402 in 2014, shows a noticeable improvement in the various fields analysed.

Generally speaking, the data provided outdo those of past financial years, and the increase in R & D & I expenditure (15%) is important as it betokens confidence in the future.

Another area where there was a strong upturn in 2014 is employment. While during the hardest years of the recession the Technology Parks environment managed to keep its employee numbers steady, in the sense that there were no job losses within a negative labour scenario, during the last financial year the workforce numbered 14,926 persons, 5.5% up on 2013, of whom 4,496 employees are engaged exclusively in R & D & I.

Although the data is combined, it’s mainly big firms that have led the comeback. This confirms their role as “engines of recovery” from the current situation.

These firms’ data present much higher results in terms of trading and of recovery in employment levels, which makes one think that their business environment is set to expand.

The enterprise and start-ups field has also been successful over the past year, with 32 new start-ups spread between the three parks. Many of these start-ups have been incubated by the instruments designed for that purpose on the technological sites themselves.

The confidence inspired by this new economic outlook has enabled pre-existing business ideas to come to fruition.

The activity carried on in the three Parks is impacting the Basque Country’s economy strongly by bringing about diversification, generating critical mass of research resources and supporting innovation. To be specific, the turnover of firms located in the Parks makes up 5% of GDP.

As to the relative strength of the different sectors in terms of firms’ turnover during the course of 2014, the Information Technologies, ICTs, are in the lead, followed by Electronics, R & D & I, Aeronautics, and the emerging Biosciences sector.

The 14,926 employees of the various firms at the three Parks make up 4.70 % of the Basque Country’s labour force. There are also a further 3,500 workers who provide support on a freelance basis as outsourcing partners.

Likewise, the economic activity carried on has brought in a good income for the various local authorities following the revenue collections that provide local funding for the municipalities where the three Parks are located: Vitoria-Gasteiz, Derio, Zamudio, Donostia, Eibar, Hernani and Leioa. 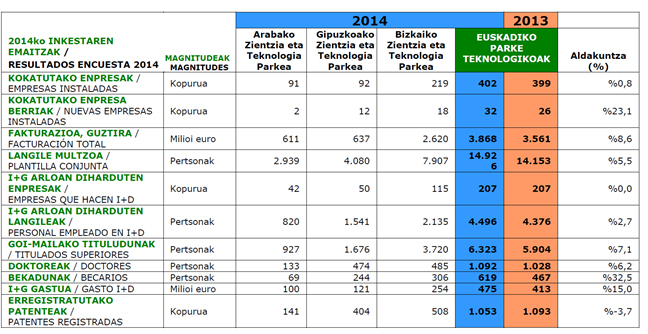