The Basque Country presents the Basque Industry 4.0 Strategy to the leading experts of the German industry 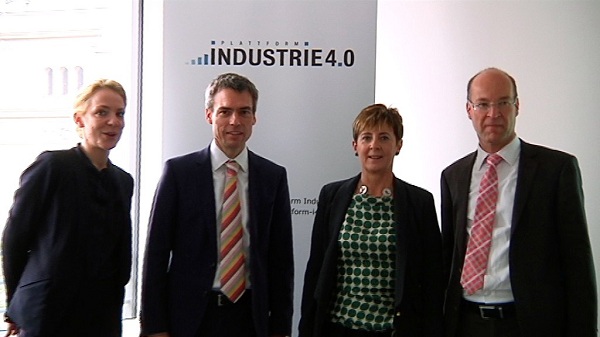 The delegation of the Department of Economic Development and Competitiveness of the Basque Country, headed by the Regional Minister, Arantxa Tapia, had the opportunity to discuss the Basque Industry 4.0 strategy with high-level experts and leaders who are developing advanced industry in Germany.

In Berlin, Arantxa Tapia met Professor Henning Kagermann, the President of ACATECH, the German Academy of Science and Engineering, and an advisor in the High-Tech strategy of the federal government due to his being acquainted with the most avant-garde trends of the digital revolution in Europe.

During this meeting held in the headquarters of ACATECH, the representatives of the Basque Government presented the Basque Industry 4.0 strategy in detail and it was compared with the German strategy, with special attention to its implementation, the leap from theory to practice, the involvement of the various agents of the country… they even had the opportunity to analyse the “new business models” created in Germany around I 4.0.

Kagermann viewed the progress made by the Basque strategy positively and said that this will be the industry which will prevail in the future in Europe if we want industry to “push” the European economy forward in a competitive way over the economies of other world powers.

I 4.0 Platform promoted by the federal Government

In the afternoon, the Regional Minister, Ms. Tapia, was received by the director of Industrie 4.0 Platform, Mr. Henning Banthien. This platform is managed by the Ministry of Economy and Energy of the federal government with the participation of a large representation of agents from industry and science.

“We have learnt about the steps taken in Germany to involve the agents of the country and implement the strategy in a process which has also been led from the political and public sphere. It has served us to detect where the main obstacles or difficulties may appear in the most practical phase, that is, promoting new real and tangible projects and  getting companies and agents involved in new business models which are sometimes unknown to the industry itself”.

The German Industrie 4.0 platform identifies the trends of interest of I 4.0 and promotes and monitors projects developed by companies themselves.

This leadership and monitoring is carried out through five working groups, similar to those existing in the Basque Country within the Steering Group. In the case of Germany the specialized groups deal with Standards and Regulations; R&D; Safety; Legal Framework, and Employment and Training.

After the meeting, one of the conclusions was that the Basque Country is moving forward with Industry 4.0 and is taking steps in the right direction, resolute steps but at a smaller scale due to our size as a country. “Hence, it is really necessary to generate collaboration networks with countries, platforms, with which we can get along and join efforts to place ourselves at the forefront of the future European industry” said Tapia.

Like Germany, she concluded “the Basque Country aims at becoming the industry 4.0 supplier and gaining competitiveness through this new way of doing”

The day was intense and included a lunch with someone who will be a guest speaker at the 2nd Basque Industry 4.0 Conference next 14 October at the Euskalduna Conference Centre and Concert Hall of Bilbao, the head of I 4.0 in BITKOM, Wolfgang Dorst.

BITKOM is the main German Digital Association, made up of different associations in the sector of information technology, telecommunications and new media. More than 2,300 companies, nearly half of which are SMEs, which are nowadays developing technological solutions aimed at industry.

This meeting has also served to see the role that EICTs play in I 4.0. Professor Dorst said that according to a recent survey by Fraunhofer IAO, a 1.7% annual increase in the aforementioned EICT areas is forecast in Germany.

In this context, the Regional Minister pointed out that there are many agents involved in the Basque Country, but it is clear for us that the contribution of “smartness” to machines by that type of companies is especially relevant and to this end we have a cluster like GAIA, which will be a major ally for the future of industry in the Basque Country.