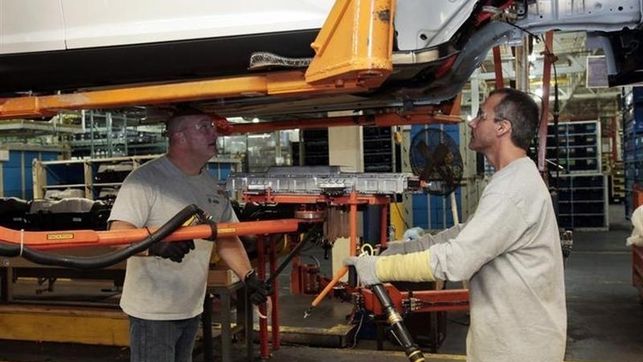 According to the Eustat, the Basque Institute of Statistics, almost all the main industrial sectors of the Basque Country have seen their production improve

The Basque industry is already noticing the long-awaited recovery in sales due to the growth of their main export markets, such as the Spanish State, Germany, France and Italy. These countries represent one third of the Basque exports.

Thus, the industrial production of the Basque Country in April 2015 increased by 5.4% as compared to the same month in 2014, which confirms the recovery of the Basque industrial sector. This sector will grow by 3.5% this year, according to the forecasts of the business organization Confebask, and will lead, together with the Services sector, the Basque economic growth.

Another positive thing is that the Basque industrial activity has been speeding up since the beginning of the year and in April it increased by 3% as compared to the previous month, March, according to the data of the Eustat, the Basque Institute of Statistics.

Moreover, the industrial boost is extending to other manufacturing segments, such as machine-tool and CIT (electronics-information technology and telecommunications). They are closely linked to business investment, another element which was finding it difficult to take off, in spite of the Basque Government calling upon companies to take advantage of the recovery.

In the case of the machine-tool sector, the employers in the Association of Machine-Tool Manufacturers reported not long ago that orders will grow by at least 5% this year, after a promising start with a 16% increase in the first quarter, and sales by at least 3%.

The evolution of the Basque sector of electronics, information technology and telecommunications, grouped together in the Gaia Cluster Association, is also very promising and a 6% increase in turnover is forecast for this year after the 2.1% improvement in sales in 2014 following five years of downward evolution.

The aforementioned two sectors join some others with a very positive evolution such as the automotive industry, aeronautics or shipbuilding, which has overcome the problems that the European Commission stopping the previous tax lease system had caused to Basque shipyards.

The Eustat points out that the evolution of the industrial activity, according to the index for April 2015, was positive for all the main industrial sectors when compared to the same month in the previous year.

In this regard, they underline that Consumer Goods are growing by 6.5%, mainly due to the considerable rise undergone by Consumer Durables, which increased by 22.5%, whereas Disposables, even though showing an upward trend too, are growing in a much more moderate way and stay at 1%.

The Energy index also shows considerable positive growth, since industrial production in this segment grows by 11.1%, Capital Goods by 10% and Intermediate Goods by 1.7%, a modest figure when compared to that of the previous segments.

Sectors such as wood, paper and graphic arts rise by 13% and machinery and equipment by 10%. On the contrary, the production of rubber and plastic goes down and shows a year-to-year fall of 2.4% and Electrical material and equipment -2.1 %.

By territories, the evolution in April of the Industrial Production Index in the Basque Country is very positive in Bizkaia, where it grows by 8.5. It also grows by 5.5% in Gipuzkoa but it slightly goes down by 0.1% in Araba.