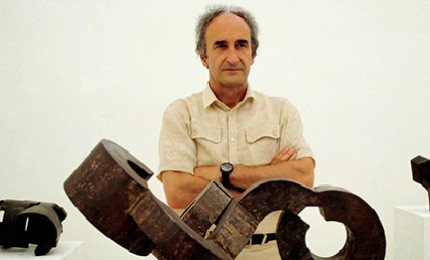 Eduardo Chillida “Reference for metal and vacuum in sculpture”

He was the third child of Pedro Chillida and his wife, the soprano Carmen Juantegui. He was a goalkeeper for Real Sociedad football team but he had to give it up due to an injury. At the age of nineteen he started studying architecture at the University of Madrid, which he abandoned to get exclusively involved in sculpture and drawing in the Fine Arts Circle of Madrid.

His activity started around 1948, when he moved to Paris. There he made friends with Pablo Palazuelo.

In 1950 he returned to San Sebastian, married Pilar Belzunce and went to live in Villaines-sous-Bois, a French town in the area of the Ile-de-France, department of Val-d’Oise. When the first of his children was born, he returned to San Sebastian and started to work at a metal workshop in Hernani, where iron marked a turning point in his career. At the suggestion of his friend Pablo Palazuelo he had his first solo exhibition at Clan Gallery in Madrid in 1954. In 1964 he was awarded the Carnegie Prize for Sculpture by the Carnegie Institute of Pittsburgh.

In 1981 he received the Gold Medal for Merit in Fine Arts in Madrid. In 1983 he received the Europäischer der Künste Prize in Strasbourg. He was appointed Honorary Member of the Royal Academy of Arts of London. In 1984 he received the Grand Prix des Arts et Letres of Paris. He also received the Prince of Asturias Award for Arts in 1987 and the Japanese Praemium Imperiale prize in 1991.

In the final part of his life, Chillida himself created the Chillida-Leku museum, in the country house in Zabalaga (Hernani, Basque Country). It is a traditional Basque construction remodelled by the sculptor and surrounded by a large area of gardens which houses the work of the artist. He was last seen there in October 2000, at an event held in the museum, when he received the Doctor Honoris Causa degree by the Complutense University of Madrid. He was not able to complete the Tindaya Mount project, since it did not come to being before his death on 19 August 2002.

Throughout his life, in addition to receiving many prizes and awards, Chillida participated in hundreds of exhibitions all over the world, such as the Biennale of Venice (1958), the Carnegie Prize (1965) or the Rembrandt Prize (1975).