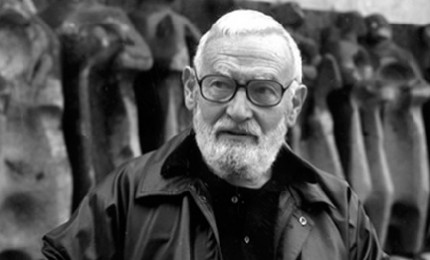 Jorge de Oteiza Enbil (Orio, Basque Country, 21 October 1908 – Donostia-San Sebastian, Basque Country, 9 April 2003) was a Basque sculptor. He is considered to be one of the main representatives of the Basque School of Sculpture.

He started his artistic activity in San Sebastian in the ‘20s, in contact with the young people who developed the artistic vanguard in his city. The first sculptures by Oteiza are strongly influenced by cubism and primitivism.

With the experimentation inherited from constructivism, Oteiza embarked on what he calls his Experimental Proposition (1955), the title with which he presented his work at the Biennial of São Paulo (1957), where he received the grand prize for sculpture. In 1959 he decided to abandon sculpture, as he understood that he had reached his conclusive phase. During those five years of activity Oteiza carried out a transcendental operation, as he placed his work along the way of the European geometrical transcendence, vindicating neoplasticism and Russian constructivism. The recovery of the European geometrical aesthetics and their influence on Basque culture lay the foundations for what is called the Basque School of Sculpture; Eduardo Chillida is its most valued representative in the art market.

During the ‘60s and ‘70s Oteiza carried out some research on Basque language and Basque popular practices. In 1963 he published Quousque tandem…! An Essay on the Interpretation of the Basque Soul, in defence of popular Basque culture and its identity, and proposes aesthetics as a science under which knowledge can be subsumed. In 1969, Oteiza founded the School of Deba in order to put these ideas into practice. The critical and theoretical works are also completed with poetry: God Exists to the Northwest (1990) or Itziar, Elegy and other Poems (1991).

Oteiza is an artistic bridge between the period of the vanguards and the post-war generation and had an influence on artistic, cultural and political sectors. He remained distant and critical with the official knowledge and always maintained his iconoclastic position as regards ideology and politics.

In 1992 he donated his legacy to the people of Navarre. After his death, in the spring of 2003, the Jorge Oteiza Foundation opened its doors to the public in the town of Alzuza in Navarre, taking up what used to be his home and workshop.