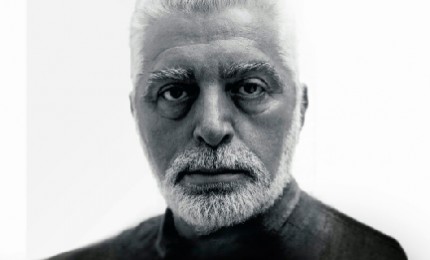 Francisco Rabaneda Cuervo was born in 1934 in Pasajes, in the Basque Country. His mother was the chief seamstress of the Basque designer Balenciaga and his father was a Republican Colonel; this would affect his life. His father was executed by Franco’s troops during the Spanish Civil war. In 1939 the family fled to France and took refuge in Morlaix and then in Les Sables-d’Olonne. Between 1951 and 1963 he studied Architecture at the National Fine Arts High School of Paris. He completed his studies and produced thousands of fashion sketches.

He is internationally known for his textile creations and for the use of diverse colours and textures. Guided by his natural talent, this iron man launched in 1964 his first experimental and unwearable dresses in contemporary materials -metal, plastic-. Due to his metal costumes or his paper dresses, the inventor of the coat-of-mail of the ‘60s is a figure of reference for many designers. Even the great lady of fashion, Coco Chanel, named him the metal worker.

Nearly thirty years afterwards, in his workshop-laboratory, he keeps doing things in the same way, with a forward-looking focus.

His favourite instruments are, apart from a pencil, pliers and a blowtorch, which is something unusual for a couturier…

His muse is a woman who he describes as the Joan of Arc of the year 2000: “a battler who dominates men in the most astonishing fashion”.

Having received many honours and distinctions, he has shown that what is important for him is to create volumes, unique models devised as ships in space. Outfits to go on a picnic decorated with plastic cutlery, bolero jackets made with bottle necks, tunics made with articulated plates.

His perfumes and cosmetics are also a work of art which is also very profitable, as his factory in France produces more than 3,000 tonnes of products a year.

Paco Rabanne is also a painter and designer. He has exhibited his paintings in Valbonne and presented a collection of six chairs inspired in his famous textures in the Maison et Objet fair. Noteworthy in 1999 was the creation of the perfume “Ultraviolet”, with an unprecedented colour and bottle.