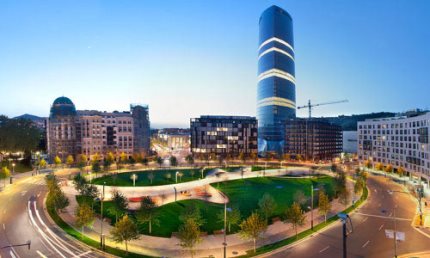 Programmes that have helped make Bizkaia a leading benchmark in Europe

Mining, the iron and steel industry and shipbuilding marked the economic potential of the Basque Historical Territory of Bizkaia throughout most of the 20th century, becoming a mainstay of the Spanish economy and a reference in Europe.  However, the crisis of the 1970’s and 1980’s had a direct impact on the main economic sectors of Bizkaia, leading to the closure of two of its emblematic companies, among others:  Altos Hornos de Vizcaya and the Euskalduna shipyard.

That situation, far from destroying the Historic Territory, became the key moment to pave the way and embark on a different social and economic stage for Bizkaia. The Sociedad Bilbao Ría 2000 led theurban regeneration of the capital and its surrounding area in order to recover former industrial areas of the city.  And this is how thetransformation of Bilbao began, with the  Guggenheim Museum as the symbol of the new urban development that has led to the city being internationally recognised as an example of successful urban regeneration.

Commitment to Innovation and Technology

This ‘First Great Economic Transformation’ helped Bizkaia and the Basque Country, in general, to recover economically. The fact is thatBizkaia has traditionally had an entrepreneurial spirit and future vision.  Now in the 21st century, the Historical Territory is firmly committed to technological innovation and is facing a ‘Second Great Economic Transformation’ that promotes the productive economy and is based on knowledge.

In recent years, public institutions and the private sector have therefore opted for innovation and the new technologies as a key value element that generates wealth and employment, which are essential in today’s globalised world, and is becoming the new economic and productive flag.

It has been possible to reach this level thanks to key elements, such as thestrong business sector and the implementation of innovation programmes, which have led Bizkaia and the Basque Country to become a reference in Spain and Europe. The latter include:

Talentia. Backed by Bizkaia Talent, the objective is to guide university students with great potential from the University of Deusto, the University of the Basque Country and the University of Mondragon to help in their labour insertion and professional development. It also seeks to foster their links with the scientific, technological and business reality. According to the study by the Bizkaia Employment Observatory in the fourth quarter of 2012, four out of every ten workers in the Historical Territory have university studies.

Talent Pro. The I.M. Altuna Foundation in conjunction with Bizkaia Talent and the Arteche Group promote this programme. It is an initiative that seeks to reward talent and innovative ideas that can be applied in Bizkaia, arising from what has been learnt and experienced during study periods in foreign universities. It is aimed at all university students in the Historical Territory participating in an international exchange university programme, such as Erasmus.

Elkartegiak. Promoted by the Provincial Council of Bizkaia, it aims toprovide infrastructures to obtain sustainable and balanced business development, offering Business Centres – Elkartegiak de Azpiegiturak, S.A.U. (public company belonging to the provincial body, under the auspices of the Department for Economic Promotion) to SMEs.

These are three programmes in which the public institutions of the Historical Territory of Bizkaia wish to continue strengthening theircommitment to the training scientific and innovation skills; whereby the latter two are aspects highlighted by the  OECD in its Review of Regional Innovation in the  Basque Country, presented two years ago at the Euskalduna Concert and Congress Hall, the first external examination of the Basque innovation system.

The report indicated the need to continue prioritising internationalresearch and technological development and ensure thatinvestment in R&D&I continues to contribute to increased productivity. In this section, the proportion of personnel from the Basque Country working in R&D is 15 out of every 1,000 people, compared to the average of 10.4 in the European Union and 10.5 in Spain.

Impetus from the basque Government

Plans and strategies are also fostered by the Basque Government through actions, such as:

?           Science, Technology and Innovation Plan 2015. Its main objective is to achieve Basque economic growth and job creation by supporting activities that create greater value through science, technology and innovation.

?    Innobideak-Lehiabide Programme. Through the Basque Business Development Agency,   SPRI, it aims to support the most innovative Basque companies and those which focus on developing, creating and accessing new international markets.

?           Gauzatu. Programme that supports strategic projects and the creation of technology and innovation-based SMEs.

?           AD@15 . The Basque Digital Agenda 2015 is a project that seeks topromote and strengthen the Information Society in the Basque Country. It is a tool that enables the Basque society to take an important leap in this field.  The objectives of the Digital Agenda revolve around four inter-related strategic axes: digital community, e-Enterprise, advanced and accessible digital services and infrastructures.

Young entrepreneurs also have specific subsidies, such as those awarded by the Provincial Council of Bizkaia through the New Enterprise Promotion Plan. Different programmes and subsidies are offered which aim to foster the entrepreneurial culture, the creation of new enterprises, the promotion of new business projects and support new strategic activities for the economy of the Historical Territory of Bizkaia.

They can also turn to Ekintzaile, support from the Basque Government for innovative business projects led by Business and Innovation Centres, CEI, which contemplates two types of help: accompaniment and access to funding.
An example of an innovative project, in this case focusing on the field of sport and the new technologies, is Ibilbideak, which aims to make the Basque Country a European reference in physical activity by 2020 via the website:  www.ibilbideak.euskadi.net. This too is promoted by the Basque Government’s Department for Sport and Youth, offering users almost two thousand routes belonging to 22 sporting disciplines with the option of creating new routes and organising group outings.

Ibilbideak offers a cartographic map with details of updated itineraries, which can be downloaded via a free application, the Aterpe social network, a meeting point for users, which already has almost 4,000 people and groups participating in the community, a route search engine, the option for users to modify routes or add others, and GPS devices for beginners, among others.