The regional tax system in the Basque Country

The regional tax system of the Basque Country, derived from the historical rights of Bizkaia, Gipuzkoa and Álava/Araba, represents one of the region’s most notable characteristics. We cannot understand the economic history of the Basque Country since the late 19th Century without the fiscal pact reached between the three Basque Historic Territories and the Spanish State: the so-called Economic Accord.

The origin of this fiscal system dates back close to 150 years. The first Basque Economic Accord was signed in 1878, and there were a further five accords developed up to 1937. During the period of Franco’s dictatorship, it was suspended in the historical territories of Bizkaia and Gipuzkoa since they were considered ‘traitorous provinces”. In 1981, it was reinstated, incorporated into the Statute of Autonomy and renewed in 2002 and 2007.

Hence, within the Spanish State, the Basque Historical Territories are the only provinces with their own regional tax regime with a similar legislative and management capacity to those of state tax administrations. Furthermore, the Basque Economic Accordincorporates a series of tax harmonisation regulations that ensure the harmonious development of the different tax systems, those of the Basque Country and in the rest of the Spanish State.

In the Basque Country, the provincial councils of Bizkaia, Álava/Araba and Gipuzkoa collect and determine the taxes paid by their citizens. With the earnings made through taxation, they cover the expenses of providing the public services required by the inhabitants of the Basque Country (infrastructures, public works, social action, culture, etc.) Furthermore, the majority of the taxes collected feed into the Basque Government budget, which in turn is allocated to all the historical territories.

The Basque Country in turn contributes to the coffers of the Spanish State through what is known as the quota, an economic amount that helps to pay for competences not transferred to the Autonomous Regions (such as the Basque Country), which the State provides to the historical territories (such as Defence, Foreign Affairs, international representation, maintenance of common institutions such as Congress, Senate, ministries, infrastructures – ports, airports, AVE high speed rail, etc.).

The quota is determined by a Mixed Committee made up of 12 members: one for each provincial council in the Basque Historical Territories, three representing the Basque Government, and six from the State Administration.

Bodies of the economic accord 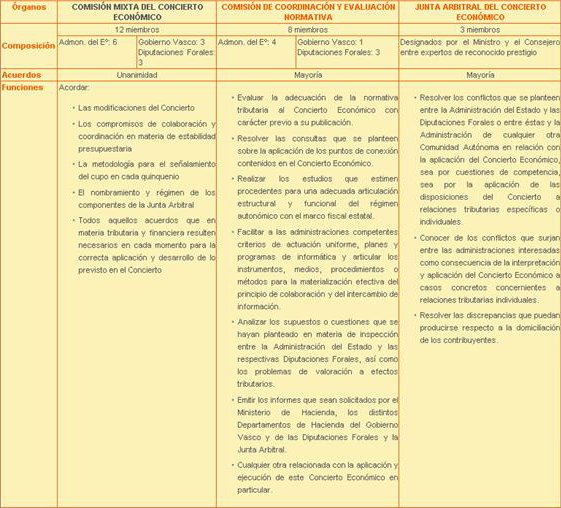 Looking at the legislative aspect, in terms of direct taxation, the Basque Country has its own Personal Income Taxation, Corporate Taxation and its own Wealth, and Inheritance and Gift Tax.

Tax authority in the Basque Country resides with the institutions in its three Historical Territories. Even so, it falls to the Basque Parliamentto greenlight laws regarding coordination, harmonisation, and fiscal collaboration.

Similarly, the Economic Accord gives the Provincial Tax Authorities (in Bizkaia, Álava/Araba, and Guipuzkoa) the power to collect Income Taxation from non-Residents, implementing the same legislation as the State, unless they are non-residents with a permanent establishment in the Basque Country. In this situation, they have legislative capacity and apply the same rules established in Corporate Taxation.

As for indirect taxation, the degree of harmonisation in two important aspects of taxation –Value Added Tax and Special Taxes – is very high, derived from the very nature of these taxes, also harmonised within the whole of the European Union. Hence, the competences of the Provincial Tax Authorities in the Basque Historical Territories are restricted to specific aspects of tax management.

The third figure with regard to indirect taxation and its collection (Tax on Wealth Transfer and Documented Legal Acts) can be regulated regionally, largely by the institutions of the Basque Country. 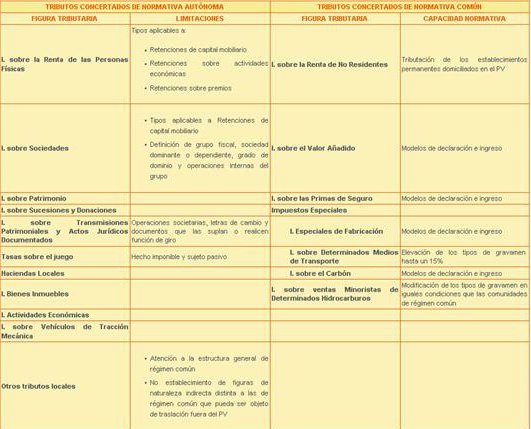 As stated by Pascual Jover, the former chairman of Caja Vital, an entity that is currently part of Banco Vasco Kutxabank, in Considerations regarding the Basque Economic Accord, “the Accord is a key element in Basque autonomy. Its suppression would be a political fiction that would be incomprehensible from a functional or political perspective. The Statute cannot be conceived of without the Accord”.

Josu Bergara, member of Congress representing Bizkaia from 1995 to 2003, added in his speech entitled 2001: A year for renewal of the Economic Accord: “The Basque Economic Accord is not a contract with a limited lifespan; rather it is a Historical Right recognised and protected by the Constitution and which, according to the Statute of Autonomy, is the instrument that governs fiscal relations between the State and the Basque Country (…) The Economic Accord and the regulations derived therein are simply the sovereign decisions of a society that uses the tools available to it to guarantee its future”.