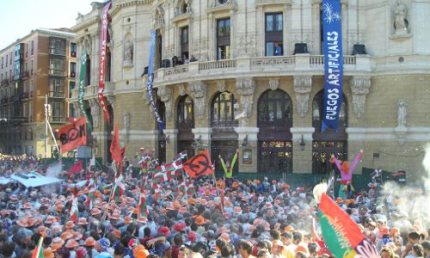 Most popular festivals and fairs in Bizkaia

Lots off festivals are held throughout the year in Bizkaia. They are part of the history and traditions of the capital city, the different towns and the Historical Territories of the Basque Country at large.

The festive atmosphere takes to the streets, attracting both residents and out-of-towners and inviting them to join in. There is traditional food, rural sports, dance, cookouts, bertsolaris (Basque musical verse singers), concerts, fireworks, processions, street parties, bands and parades… The festivals are open to everyone: locals, newcomers, and people living in the Historical Territories for work or study.

They are all welcome to Bizkaia’s popular festivals. The best known among them are:

Festivals and fairs in Bilbao

On Saturday following the feast of Our Lady of Begoña (15 August), Bilbao gets all dressed up to welcome Marijaia on the balcony of the Arriaga Theatre. Marijaia, the doll that has become the symbol of Aste Nagusia, was designed by painter Mari Puri Herrero in August 1978). 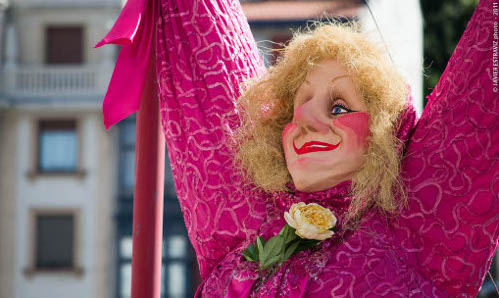 Aste Nagusia celebrations begin with the launch of the txupin (firework rocket) by the txupinera and the person delivering the opening speech, and they go on for nine days, filling the capital with joy and merrymaking.

There are several nerve centres during Aste Nagusia: squares, streets, theatres where you can watch a show or have fun with your family. There are street performances, concerts in the open air, txikigune (children’s activities), kiosks, cooking contests, circus numbers and other entertainment activities. On the whole, 300 choices for all kinds of people.

Also, people sing the song of Marijaia, ‘Badator Marijaia’, a sort of anthem that can be heard once and again during the festival.

Konpartsak (dance and music societies) are another key element ofAste Nagusia. Working with the city authorities, they plan entertainment programmes, concerts and cultural activities. Eachkonpartsa has its own txosna (kiosk) offering beverages and pintxosuntil the early hours. Specially set up for the festival, they are one of its most popular sights.

On 21 December every year, the feast of St Thomas draws lots of people to Bilbao, ready to try all kinds of artisanal products, from talo con chorizo (a sort of Basque tortilla), txakoli wine or cider to the most traditional sweet: Basque pie. 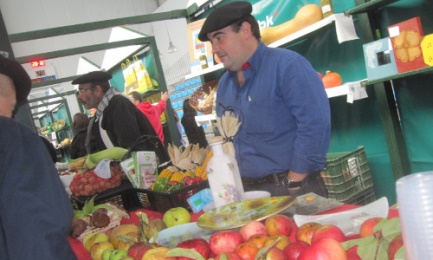 The St Mark’s food market has been held for 60 years to great success. Hundreds of baserritarras (traditional farmers) show their best produce: fruit and vegetables, legumes, bread and cheese, pork, sweets, plants and flowers, even chicken, hens, capons and rabbits. More than 280 stands (286 in 2013) are set up in the areas of El Arenal and Plaza Nueva, in the heart of town, and thousands come to browse and be part of this long-standing tradition.

The market is associated with the annual fees that baserritarras used to pay to their landlords for the baserris where they lived and they fields they ploughed. When they came to pay the rent, they sold their surplus: fruit, vegetables, animals, cheese, cold meats, etc.

Of course, music is never absent. Bertsolaris, traditional musical instruments like the txalaparta or the trikitixa and music bands all make their contributions to the festive ambiance.

Festivals and fairs in other parts of Bizkaia

The feast of La Magdalena has its roots in the dispute for the island of Ízaro between the municipalities of Bermeo, Mundaka and Elantxobe. The argument was settled with a challenge in 1719: the team reaching the island first on a traditional rowing boat or trainera would take the island home. The race was won by the oarsmen from Bermeo. Since then, this peculiar regatta is re-enacted on 22 July every year.

The Bermeo authorities take to the sea and get to the island. There they throw a roof tile into the sea to affirm their sovereignty. In addition, an ikurriña (Basque flag) is hoisted in the highest point on the island. This marks the beginning of the celebrations.

On this day, people wear special clothes, especially a dark blue shirt standing for the men at sea. It is a popular feast indeed, drawing lots of visitors every year.

On 5 September, Lekeitio holds Antzar Eguna, or Day of the Geese, celebrating the feast of St Antoninus of Pamiers (St Antolín). The ceremony is a show of strength and skills, where teams try to break a goose’s neck (the animal is already dead). The winners are those who sever the goose’s head or those with the highest number of alzadas (lifting a man and plunging him into the water after he catches the goose).

The ceremony is supplemented with music and street performances. It is one of the most popular feasts in this coastal village.

This is one of the most significant rural festivals held in the Historical Territories of the Basque Country. Stands are set up selling cheese, legumes, vegetables, txakoli wine, bread, Basque pie, fruit, honey, cider, doughnuts, flowers and many other things.

Visitors are shown how these artisanal products are made, tour a farming exhibition and try the great local food.

It is a very special day in town, indeed. Streets get all dressed up to welcome bertsolaris (Basque musical verse singers) and traditional sports competitions. Everyone is invited to join in.

Feasts and festivals in Álava/Araba and Gipuzkoa

Bizkaia is not the only historical territory where alluring festivals are held. Álava/Araba and Gipuzkoa are also home to recreational activities and religious celebrations.

In Álava/Araba, they celebrate the feast of St Prudentius, their patron saint, on 27 April (the day before the religious feast) with atamborrada (drum playing) in Plaza de la Provincia in Vitoria-Gasteiz, the provincial capital. On the following day, there is a procession to the Basilica of San Prudencio de Armentia.

On 4 August, Vitoria-Gasteiz celebrates the festival of Snow White Virgin Mary, beginning in Plaza de la Virgen Blanca and bringing down the character of Celedón, the typical Álava/Araba villager. Thousands of Vitoria residents and visitors meet for this festival.

In Gipuzkoa, one of the most popular events takes place in San Sebastián. It is the Danborrada, or drum festival, held on 20 January. Right at midnight, the city flag is hoisted to the sound of the official city march. Since then, drums and barrels are played for 24 hours, non-stop. While drummers play wearing their Napoleonic uniforms, cooks come out with their barrels, dressed in white. 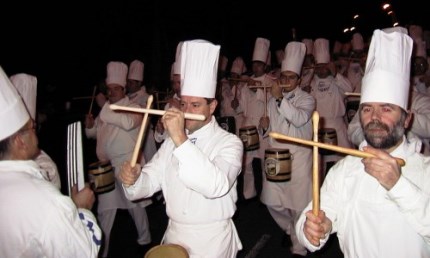 The Big Week in Donostia is in the week of 15 August. There are lots of concerts and activities for adults and children alike. Lights and fireworks can be seen on the beach, too.

The capital of Gipuzkoa also holds trainera regattas, traineras being the traditional rowing boats of the Basque people. The most important and traditional of all, the Regattas of La Concha, Flag of La Concha, have been held since 1879. The strongest oarsmen in the Cantabrian Sea come face to face in eight teams on the first and second Sunday of September. Winning the regatta – and the flag – is a much appreciated victory among rowing clubs in the Cantabrian. 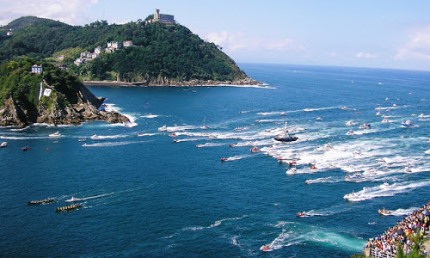 The Carnival celebrations in Tolosa are among the best known in the Basque Country. Taking place in February, it takes six days, beginning with a txupinazo from the balcony of the local Town Hall.Konpartsak, floats and brass bands are ever-present, and people take to the streets wearing the most amazing fancy dresses.

The deeply-rooted Cry of Irún is held on 30 June, feast of St Martial, in remembrance of the defeat of the French troops in the Battle of St Martial. On 8 September, Hondarribia remembers the French attack they suffered in 1638 and the promise locals made to Our Lady of Guadalupe: if they were spared, they would go on a procession to Her shrine every year. And they still honour their historical word.

9 September, feast of Our Lady of Aranzazu, is the Basque Festival in Zarautz. Also known as Euskal Jaia, the festival shows all kinds ofBasque folk traditions. There are dantzaris (traditional dancers),txistularis (flutists), parades, concerts and children’s games.