Basque sports: a hallmark of the Basque people

In all the Basque territories, people have engaged for centuries in a series of traditional sports originating in the countryside. Today they are known as Basque rural sports or games. Many of them began as challenges or bets.

This is one of the oldest, most traditional sports in the Basque Country. It changed with time, improving rules and facilities, to become the most universal of Basque sports. It even has a global governing body: the International Federation of Basque Pelota. Its internationalisation had a lot to do with Basque immigrants bringing their customs and traditions wherever they went.

Basque pelota has many different variants, characterised in terms of the court and the equipment. The court is usually a one- or two-walled fronton (front and left walls) of various lengths: up to 35m, up to 45m or up to 60m..

The game is played with a ball hit using one’s hand, a leather glove, a bat known as pala, a soft racket or sare, or a basket. The most popular variants are hand pelota and jai alai (literally, ‘happy party’ in Euskera). Hand pelota (sometimes spelled as ‘pilota’) is the best known style, like the epitome of Basque pelota, whereas jai alai (or zesta punta) is played internationally. Jai alai is the world’s fastest ball game, with balls thrown at an incredible speed of up to more than 300km/h. It is a particularly tough sport, for players have to hit the leather ball with their open hands. It has three modalities: plaza libre, short fronton or trinquet court, and it can be played individually or in pairs. Basque pelota is a professional sport with many fans and broad media coverage worldwide.

Wood-chopping competitions by aizkolaris (‘wood choppers’ in Euskera) are among the most popular of Basque sports. They had their origin in the woods, when coal workers need wood for vegetable coal and woodcutters had to use it for construction. In those days, bets were made to see who would fell the tree first.

The aizkolaris use axes to chop the trunks. The game has two modalities: either participants are asked to chop a fixed number of horizontally laid trunks while standing on a plank or they have to chop a single trunk with the lowest possible number of blows. 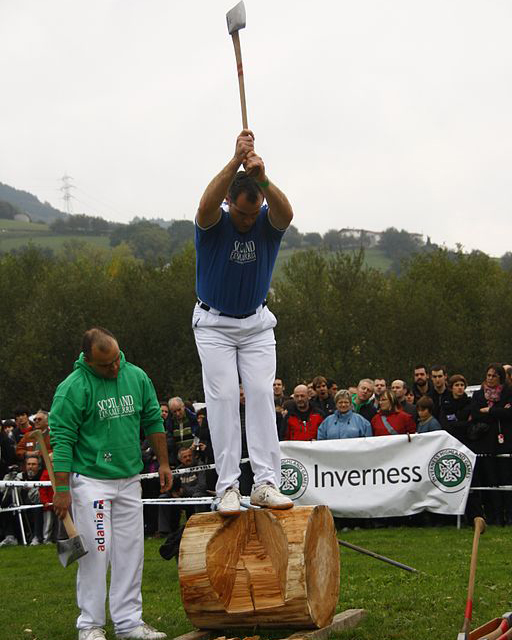 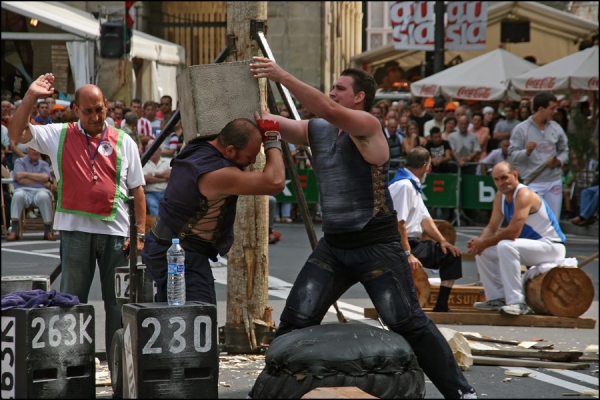 There are individual challenges too, where harrijasotzailes are asked to lift a single stone as many times as possible or lift the heaviest possible stone. The strongest harrijasotzailes can lift stones as heavy as 300 kilos.

The origins of Basque stone-lifting are not clear. Lifting stones in the mountains or off river beds must have been a way of measuring men’s strength. Stone-lifting competitions used to be common in town fairs, when young men competed to see who was the strongest.

With time, official tournaments began to be held, and now there are stone-lifting exhibitions in festivals or fairs. In the twentieth century, the shapes of stones were regulated into four: cylinders (100-125 kilos), cubes and rectangles (125-325 kilos) and spheres (112-125 kilos).

In sokatira (tug-of-war), two teams of eight compete trying to drag the other team over a line by pulling on the rope. The captain, botillero, guides the team members in their efforts.

The players must pull on the rope with both hands, and they must be careful not to step off their lane (usually 2m wide). Teams whose members step out of their lane are disqualified. The dragging area, marked on both the ground and the rope (red marker in the middle), is 2.50m long.

Most competitions take two legs, with teams changing sides after the first one for balance and fair play in terms of ground characteristics (bumps, slopes, etc.). It the competitions ends in a draw, the winning team is the one that dragged their rivals to their area in the shorter time. 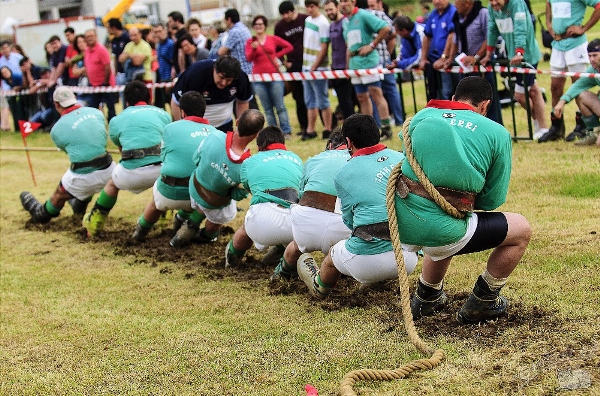 Basque rowing competitions evolved out of the fishing activity. Fishermen would compete to be the first in coming to the port, for this meant getting better prices for their catch. Or they fought for jobs and higher salaries in towing big ships into difficult ports.

The boats used changed with time. At first, regattas were performed in the same wood traineras used for fishing. Now they are sports rowing boats with fixed seats, complying with strict weight and size regulations.

The crew is made up of 13 oarsmen and a cox, who faces them at the stern.

The most popular regattas are held on La Concha Bay in San Sebastián on the first and second Sunday of September. The first of them took place in 1879. But the first recorded competition was between the villages of Mundaka and Bermeo in Bizkaia to control Ízaro Island. It was won by the Bermeo team. 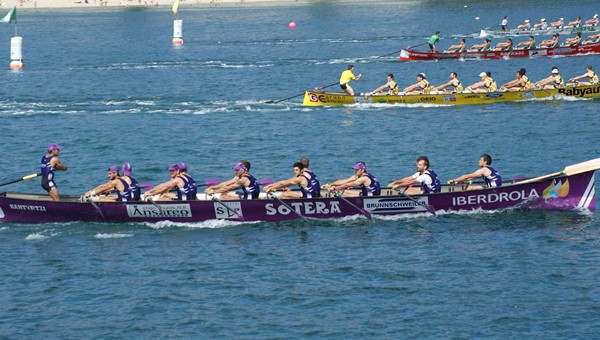 There is a professional trainera regatta league, unfolding every year from July to September.