The Guggenheim Bilbao, “the most beautiful museum in the world”

Bilbao has become a reference city, a meeting point, a business hub, and a destination for leisure travellers from the country and beyond. All this was, at least in part, made possible by the establishment of two world-class venues: the Guggenheim Museum and the Euskalduna Conference Centre and Concert Hall.

Contained in a comprehensive plan to revitalise Bilbao and the surrounding area in the cultural, economic, social and urban spheres, the Guggenheim Museum and the Euskalduna Conference Centre and Concert Hall have definitely met their goals. The Guggenheim Museum has lived up to the expectations everybody had placed on it, at the artistic and cultural as well as the economic and social levels, while the Euskalduna Centre, one of the leading conference centres in the Spanish state, doubles as a major concert hall as well.

In 1991, Basque authorities proposed the idea for the construction of a modern and contemporary art museum in Bilbao to the Solomon R. Guggenheim Foundation. The result of this exceptional cooperation, the Guggenheim Museum Bilbao was inaugurated in 1997 for the collection, conservation, exhibition and research of modern and contemporary art from different perspectives. All these goals are attained inside an iconic building of cutting-edge twentieth-century architecture designed by Frank Gehry, considered to be one of the world’s leading architects of our age.

With the construction of the Guggenheim Museum on the site of a former wharf used for port and industry activities, a major urbanredevelopment project kicked off, including the rehabilitation of the banks of the river Nervión, to be used for cultural and recreational activities.

Gehry’s spectacular museum was a turning point in the city’s economic, social and tourist activity. Its bold shape, covered in thintitanium sheets, and its innovative design seamlessly integrate into the city environment, making a real architectural milestone. This and the Museum’s superb holdings of contemporary art transformed it into a powerful driving force in the economic, urban and social revitalisation of Bilbao. The Museum itself was soon considered as asymbol of the vitality and modernity of the Basque Country..

Guggenheim Bilbao: a space open to the arts

Standing on the bank of the river, the Museum is surrounded by wonderful walkways and squares. Outside the building there are works of art by such artists as Louise Bourgeois, Eduardo Chillida, Yves Klein, Fujiko Nakaya or Jeff Koons (who created Puppy, the giant sculpture of a flower-encrusted puppy dog that guards the entrance to the building).

Inside, the three levels are organised around the central atrium, the beating heart of the Museum and one of its signature traits. The atrium is an ample space flooded with bright light whose distinctive curves, glass curtain walls and great skylight connect the interior and the exterior of the building. Around the atrium, playing with volumes and perspective, are the 20 rooms dedicated to art exhibitions.

The Museum’s collection currently boasts 124 works by 70 national and foreign artists. The collection is grouped into four small selections:

– The second one gets deep into the 1970s and 1980s, focusing on the generation of European artists that includes Georg Baselitz, Christian Boltanski, Anselm Kiefer, Gerhard Richter, Francesc Torres and Richard Long.

– The third show examines the works by the founders of Pop Art and other artists with some connection to this movement. Included are works by Andy Warhol, Jean-Michel Basquiat, Robert Rauschenberg or Alex Katz.

– Finally, the fourth selection, starting in the 1990s, centres on contemporary artists such as Juan Muñoz and José Manuel Ballester, among others.

In addition, the Guggenheim Museum Bilbao has a visitor’s room, Zero Espazioa, a 330-seat auditorium, a bookstore-cum-gift shop, a cafeteria and two restaurants for extraordinary international culinary experiences. With a Michelin star, the Nerua Restaurant, run by Josean Alija, offers avant-garde food, with revolutionary and innovative aromas, textures and flavours. Although more informal, theGuggenheim Bilbao Bistro is still a fine café with a character of its own.

Readers of the prestigious travel magazine underscored the futuristic architecture and innovative design of Frank Gehry’s building, its curved lines and the beauty of its interconnected titanium and limestone-clad volumes. 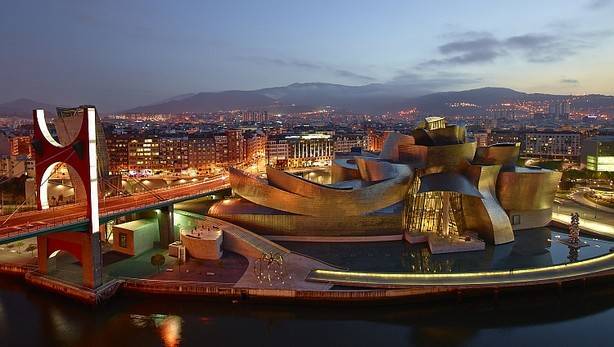