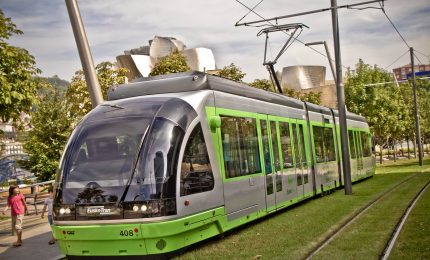 Bilbao’s public transport system is punctual and uncrowded, according to a study carried out by the prestigious organization OCU that has given the capital of Bizkaia first place among the 21 cities assessed. Bilbao tops the national ranking for trams, scoring 100/100, for the metro – 86/100, and for the municipal bus service – 68/100, and has become the city with the best public transport, ahead of big cities such as Madrid and Barcelona.

It is worth mentioning that Bilbao, the capital of Bizkaia, is the city with the lowest use of private vehicles and is the leader in the Spanish state in terms of travelling on foot and by bicycle, a further indicator on the road to becoming a benchmark of quality of life and mobility in terms of talent attraction.

Tourism in Bilbao has increased exponentially over the last few years, as has the public transport offer. Bilbao now boasts a full range of public transport services (metro, trams and buses) which connect all the parts of the city together and allow for fast and comfortable moving around the city.

Bilbao Metro is the most widely used public transport. With simple access points, spacious stations and its highly original architecture, the metro has three lines that connect the city centre with even the most outlying neighbourhoods, and it also reaches out to several nearby towns in the province.

The Bilbao tram has a single line of nearly 6 kilometres and 14 stops, connecting several of the city’s suburbs. The tramline has contributed significantly to integrating the two banks of the river into an area with great potential for the development of a top quality urban space.

Finally, Bilbobus, Bilbao’s municipal urban transport service, currently has 43 lines and over 500 stops throughout the city, meaning that 99.8% of Bilbao’s citizens have a bus stop no more than 300 metres from their homes.