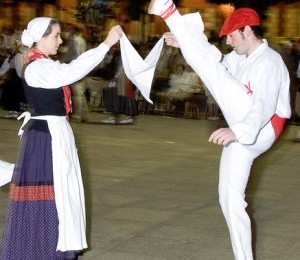 Aurresku is a popular Basque dance, solemn and elegant, that is performed as a tribute or a way of honouring prominent figures of the local society. As such, today it is performed in all types of formal events in the Basque Country: weddings, openings, congresses, functions, etc. This is why it is one of the best-known expressions oftraditional Basque culture, both in our country and abroad.

In its modern form, the aurresku is performed by a dantzari (Basque word for ‘dancer’) or aurreskulari (aurresku dancer), accompanied by a txistulari, a musician who plays the txistu (traditional Basque wind instrument played with only one hand) and, with his free hand, the drum. Danced in the traditional fashion, it comprises four parts: aurrez-aurre, esku aldatzea, zortziko and agurra.

The origins of aurresku

The aurresku of honour (ohorezko aurreskua in Basque) has its origins in the older soka dantza (meaning ‘circle’ or ‘line dance’). It is a line dance for men holding hands or handkerchiefs. This social dance has always been the most popular in the Basque Country, as it would be danced by the people in popular feasts as well as by representatives and mayors. For this reason it has a multiplicity of variants and has been named in a host of different ways. 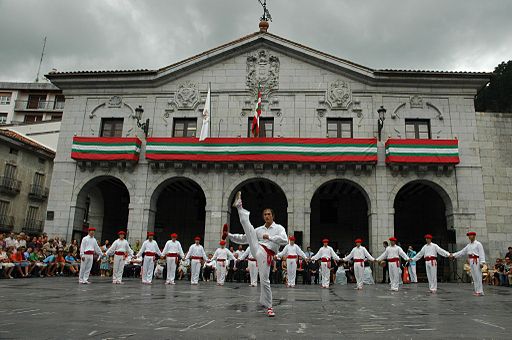 In this dance, comprised of several different parts, the most important men were the front dantzari or aurresku (front hand) and then the last dantzari or atzesku (last hand). Both dancers went walking solemnly around the town square with their txapelas in hand; the aurresku was the main dancer and danced in first place. Being the aurresku was an honour, and disputes would arise to be chosen as such. 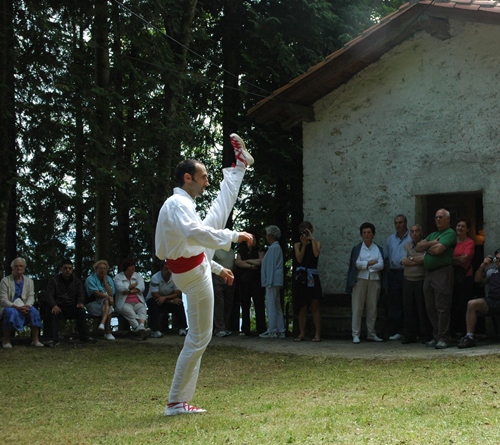 Following the opening dance, the aurresku and the atzesku would go to the centre of the square and danced one in front of the other. This second part was called aurrez-aurre (one in front of the other) or contest. After that, two or four members of the soka (line) would come out to pick and bring along a woman, usually the mayor’s daughter or a young lady of similar prestige, to be the partner of the aurreskulari. The dantzari took a few steps farther to dance before her, while she stood still during this most difficult part of the dance. When it was over, the ritual was performed all over again by the atzesku, whose female partner was someone of similar relevance.

The evolution of aurresku

In the old days, the steps were improvised but, with the passing of time, they became fixed and more complex until the present day, when the dance is really spectacular. Now, it can only be performed by an expert dancer, in very good shape and after long rehearsals.

Over the years, the parts of the soka dantza for the soloist (aurresku) gradually separated to become dances on their own right, individually performed, giving rise to today’s aurresku, which is named this way after the person who performs it, the leading dantzari, aurresku or front hand.