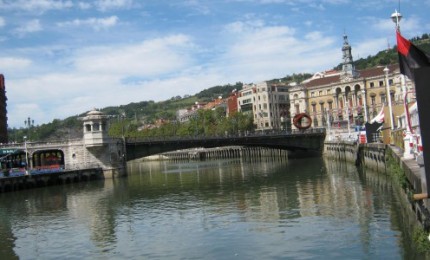 The River Nervion, unquestionable axis of Biscay and worldwide example of urban regeneration

In Basauri, the River Nervion and the River Ibaizabal merge, forming an estuary which becomes the Nervion Estuary in the Bilbao neighbourhood of La Peña. This waterway crosses the area known as Greater Bilbao until El Abra, where its mouth widens out and its waters join forces with the sea.

The river has been and is the backbone of this region. A natural boundary that divides Greater Bilbao into two historically very different districts: the left bank, the historically working class and more proletarian area, whose inhabitants depended on the port, mining and industrial activity and the right bank, historically the capitalist area, which is more residential.

The river is the soul of the Historic Territory of Biscay. The most important centres and villages were set up on its banks. It has been the driving force of the development of the towns on its banks and surrounding area, since Bilbao emerged on its banks in 1300, as a small commercial and seafaring centre.

Later, over the centuries, its metropolis grew and extended along both banks of the river to the sea. At first, the banks were fields, beaches, marshlands and pastures. Its water was used to irrigate fields, allotments, fruit trees and rich forests. In the 18th century, the Bilbao riverbanks became the most productive and best cultivated meadow in Biscay, as the fertility of its land was combined with the excellent water quality and the abundance of fish.

As a result of this natural wealth, population centres dependent on the river soon emerged, but it was, undoubtedly, first of all trade and then industry, what really made  Greater Bilbao prosper. However, to do so, the river had to undergo works and modifications until it achieved its  optimum use as a waterway. This turned it into the lungs of maritime trade and the ideal settlement for the industrial sector.

Travelling up the River Nervion means embarking on a journey to the heart of Biscay’s industrial past, as its waters have been the stage for the most diverse range of activities since the Middle Ages, and headquarters, since halfway through the 19th century, of companies that underwent incomparable economic development in this region during the 20th century.

It all began when investors, shipyards, ship-owners, traders and bankers began to spread along both banks. In 1841 Santa Ana de Bolueta was set up, the first Limited Company in Biscay, which was responsible for the transformation of the old ironworks into blast furnaces, the prelude to the vertiginous metallurgical activity that would later be rife in the river.

After Santa Ana, a long list of all types of companies, found the perfect trampoline for their activities in the river, as large vessels for long distance transportation could anchor up on its banks, alongside the factories.

The iron and steel industry in the Historical Territory  reached its peak industrial activity. A mosaic of small and medium sized enterprises emerged from Deusto to Las Arenas, taking over the banks of Erandio. Dependent on each other, the railway companies were responsible for transporting the mineral to the factory and the final product to the river for distribution.

However, this thriving industrial past changed drastically after the crisis in the 1970’s. Bilbao, with its economic activity focused on the mining, manufacturing, port and metallurgical industry, fell sharply, bringing negative repercussions for the economy, environment and Bilbao’s urban landscape.

The decline of the industries and infrastructure generated a large number of degraded and neglected areas. The frenetic industrial activity, along with the limited environmental awareness, at that time, caused alarming pollution of the river and its tributaries.

Finally, the authorities became aware of the importance of recovering the natural state of the river, which became one of the main objectives in Bilbao in terms of environmental restoration. At the end of the 1970’s, the Bilbao Water Board drew up a Comprehensive River Clean-up Plan which began in the 1980’s and has been almost completed today.

With the clean-up of the river, the change began and the foundations for today’s Bilbao were laid.  The transformation has been spectacular. Greater Bilbao has been significantly changed. The riverbanks have been restored and renovated, following the guidelines of the most innovative architectural tendencies.  The former buildings and infrastructures have disappeared, whilst others have been recovered and conserved: wharfs, docks, mineral loading bays… that are a reminder of this highly productive past.

The River Nervion has been recovered for the city and has brought about the major tourist attractions of Bilbao: Euskalduna Palace, Guggenheim Museum, Uribitarte walkway or the new parks in Abandoibarra, among others. 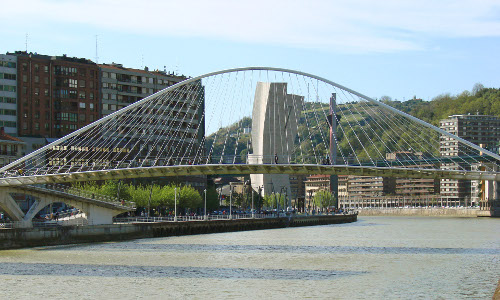 Furthermore, recovering the purity of its waters has enabled sporting activities to be taken up again.  In the summer of 2013, sporting activities exceeded 10,000 users, according to data collected by the Department for Basque, Youth and Sport of Bilbao City Council. The sports on offer include dinghy sailing, canoeing, paddle surf or rowing.

The River Nervion hosts many  sporting events, such as the Bilbao World SUP Challenge, with points counting towards the world series of the Waterman League (Surf, Windsurf, Kite-surf, Stand Up Paddle and Longboard), the  Bilbao-Tecuni Night-time Regatta, in which the  fishing boats participated for the first time ever in a night-time competition  or the International River Nervion Crossing and the International River Nervion Downstream Event. These last two canoeing events, which are a big hit with competitors and the public, pass through all of the municipalities from Getxo to Bilbao. 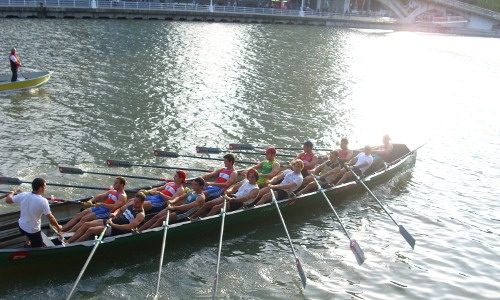 Proof of the extent of efforts to recover the water quality over the past decade lies in the Bilbao Triathlon, in which hundreds of athletes swim in the river.

Another of the great sporting events in which the river has been centre stage is the Red Bull Cliff Diving 2014 competition, held in the capital of Biscay last September.  An event that attracted over 50,000 spectators to watch the world’s top cliff divers hurl themselves into the  river from La Salve Bridge. Given the success of the event, Bilbao’s river will witness the grand final and the 50th stop in the history of the World Series on 26th September 2015. 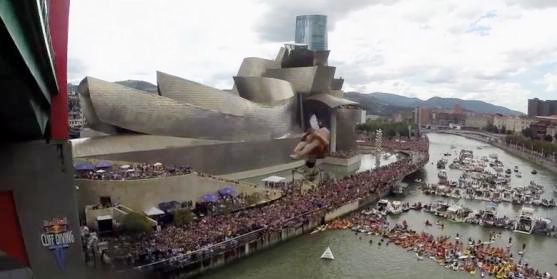 Such scenes, which were unthinkable in the past, mark a before and an after in the process of recovering a natural space in the city that has become a reference point for leisure and tourism.