The Basque country has moved up two positions in the global Human Development ranking and ranks eighth in the indicator which measures people’s well-being and progress beyond the economic situation.

Thus, according to the Human Development Index (HDI), the Basque Country -with 0.915 points – is in one of the top positions, only behind Norway, Australia, Switzerland, Denmark, the Netherlands, Germany and Ireland.

This index is a very important indicator of human development prepared by the United Nations and, unlike those normally used which measure the economic data of a country, it analyzes health, education and income. The latest report published by the United Nations Development Programme (UNDP), with 2014 data, establishes a global ranking of 188 countries according to their living conditions.

The study gives each of these countries a HDI – on a 0 to 1scale – according to life expectancy at birth, the expected number of years of schooling for children at school age, the average number of years of education received by people aged 25 years and older and the gross national income per capita.

The Basque Agency of Statistics, Eustat, has calculated the HDI of the Basque Country for the period 2010-2014 using the methodology of the UNDP and has obtained 0.915 points, the same as the United States, which places the Basque Country within the top positions in the group of countries with Very High Human Development. Moreover, between 2010 and 2014, the Basque Country moved up from the tenth to the eighth position, overtaking the United Kingdom and New Zealand.

The Basque rating and its position in the HDI list is above that of Spain, which obtained an HDI of 0.876 and ranks 26, behind Slovenia.

The global HDI Report prepared in 2015 by the UNDP on which the analysis of the Eustat is based, focuses on the work factor and highlights the “impressive progress on human development over the past quarter century”. “Today –the UNDP points out – people are living longer, more children are in school and more people have access to clean water and basic sanitization.

Per capita income in the world has gone up and poverty has gone down, resulting in a better standard of living for many people. The digital revolution has connected people across countries and societies. Work has contributed to this progress by building people’s capabilities. Decent work has provided people with a sense of dignity and an opportunity to engage fully in society”. 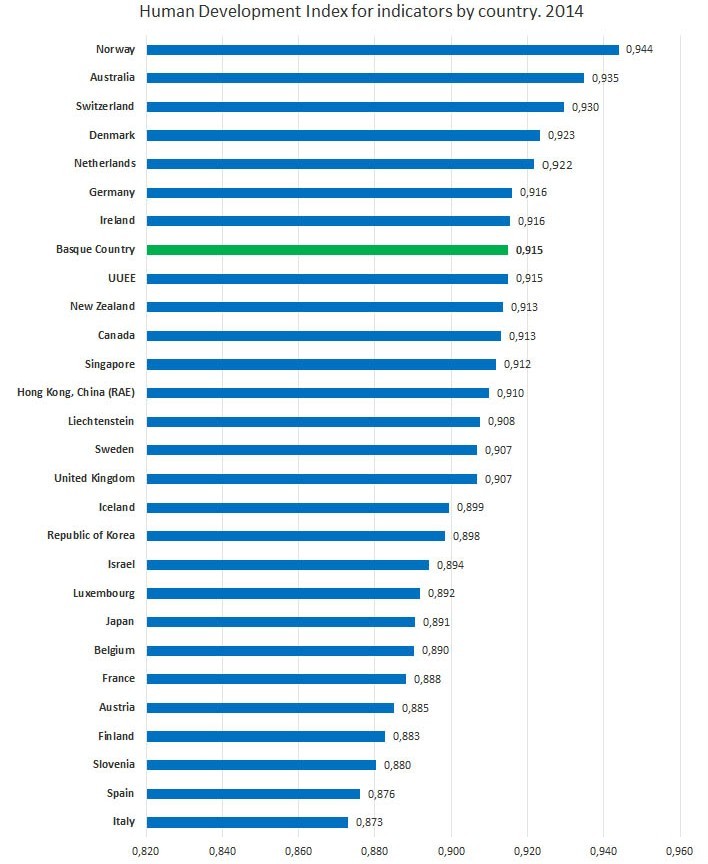