For a welfare state to work financially, you need an attractive, competitive economy with high employment rates and sound taxes and social contributions.

The Basque Country is on its way to becoming an economy based on knowledge and innovation, open to international markets, with a resistant industrial fabric and high-end technological content. And this is so because innovation is one of the key strategic aspects of social, cultural and economic development in any country set on accomplishing the highest possible growth and wellbeing.

The Basque Country has been working on its innovation system for years, aimed at becoming a European reference by 2030. The efforts have begun to bear fruit in various fields and earn recognition in Europe. Both the Basque Country and Navarra are ahead of the curve at the Spanish level, being classified as innovation followers, the Spanish state being in the group of moderate innovators according to the Regional Innovation Scoreboard 2014 (an innovation measurement report by the European Commission covering 190 European regions).

As a matter of fact, the Basque Country has all it takes to become a reference in innovation and a model of competitive economy supported by world-class infrastructure and equipment, and by the cultural, social and economic involvement of both public and private organisations to reach the welfare state.

Private business has also taken a big technological leap with the establishment of two different organisations. First of all, Tecnalia, aimed at contributing to economic and social development through the use and promotion of technological innovation, and the development and dissemination of research in an international context. Secondly, the IK4 Research Alliance, a cluster of nine Basque technology centres producing, recruiting and transferring scientific and technological knowledge and thus contributing to the improvement of business competitiveness and social progress.

According to Ikerbasque, the Basque Country’s commitment to research is not just theoretical: it has had a return on investment of 2 to 1. The road ahead is now clear, and Basque R&D+i is on its way.

In 2012, the Spanish state spent €13,392M in research and development, which meant a 5.6% decrease over the previous year. According to data collected by the Spanish Institute of Statistics (INE), R&D expenditure in 2012 accounted for 1.30% of the national GDP. 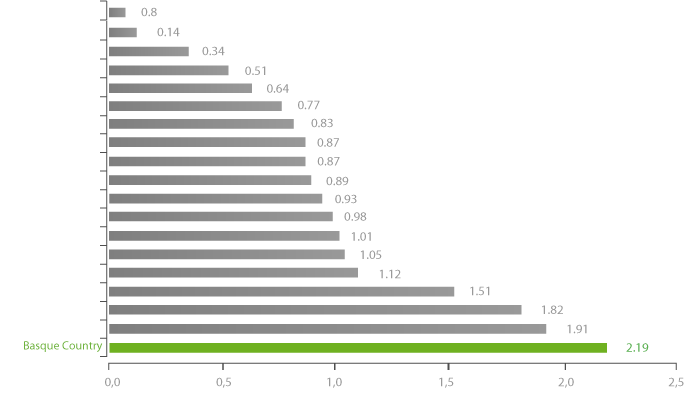 R&D expenditure in the Basque Country has been systematically above average, with a growing gap in the past few years.

Innovation expenditure by sectors in the Basque Country

In 2012, the Basque Country invested €1,372.9M in R&D activities. According to the Basque Institute of Statistics (Eustat), this was 0.5% more than in the previous year.

Regarding R&D expenditure in business, 43.1% corresponded to industry, 54.1% to services and 2.8% to construction and the primary sector.

Towards social and eco-innovation

Besides scientific and technological innovation, the Basque Country is also committed to social innovation as a new solution to social problems, more effective, sustainable or fair than those currently available, and adding value to society as a whole. The European Commission’s Guide to Social Innovation mentions three experiences associated with good practice in the Basque Country: Innobasque, Denokinn and Bilbao Eutokia.

Likewise, the Basque Country is a leader in eco-innovation, developing, testing and implementing new technologies and knowledge in a favourable environment. Eco-innovation encompasses all those forms of innovation reducing the environmental impact and optimising the use of resources.

All the innovative action taken is having a positive impact on job and wealth creation, as well as on social welfare creation, in the Basque Country. The projects under way are leading to the establishment of new businesses and business models, filling in the gaps in the region and attracting international actors.