Quality of life and balance in the Basque Country

Quality of life not only depends on palpable factors, usually related to economy, health, educationor safety. It is also supported on impalpable aspects, as culture, roots, heritage or identity signs, among others. The balanced mixture of these factors allows developing a high satisfaction grade orwell-being in the citizens.

Quality of life in the Basque Country has registered an obvious and constant growth during the last two decades, according to the 2012 Report about life conditions and social well-being, carried out by the Basque Statistics Institute (Eustat).

In this sense, the inhabitants of the Basque Country set their level of life satisfaction in a very similar scale to the citizens from countries as Switzerland or Norway, and over Sweden, Island, Holland, Denmark or Finland, if we take as reference for this affirmation the Index for a Better Life carried out by the Organization for Economic Cooperation and Development (OECD). 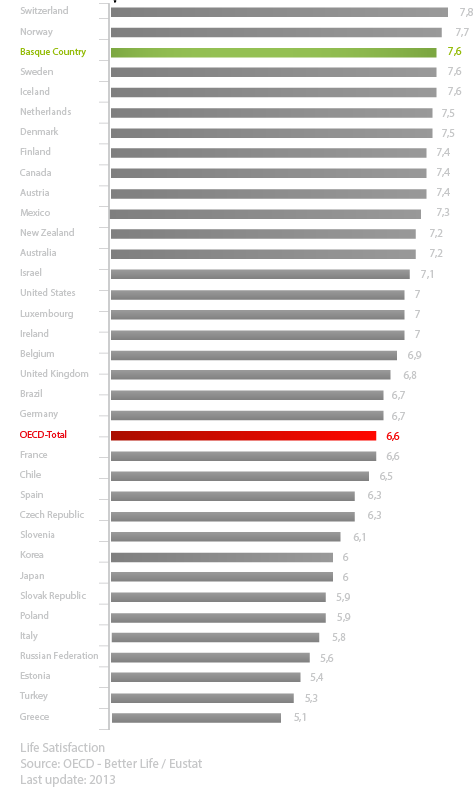 According to this index, that has been created to measure and compare the well-being in the different OECD countries according to 11 essential topics identified by this organization, the Basque Country is placed with a 7.6– within the countries with a better satisfaction in life, emphasizing the reference factors of safety, health and environment.

In the working environment, for their part, workers in the Basque Country are the most satisfied with their employment, above Denmark and Norway, which come after in the ranking carried out in more than 30 countries worldwide by the international Human Resources consultancy Randstad in its workmonitor. A relevant fact, since the satisfaction degree of the employees at their workplace is important for talented professionals decide to stay in that company or country. 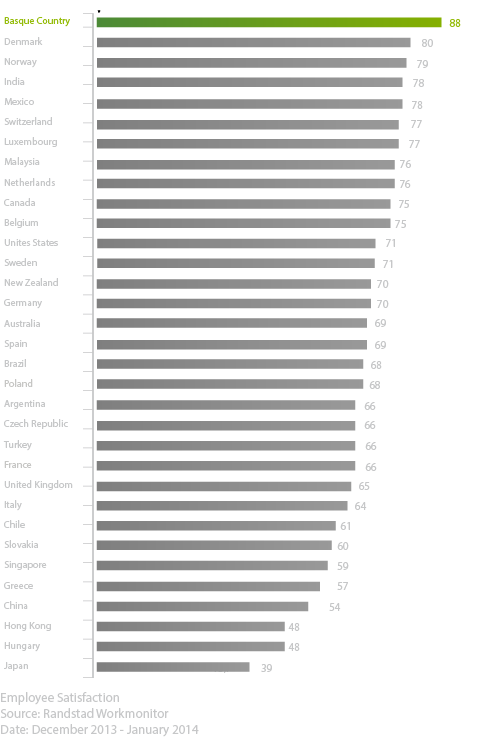 In the section on Safety, the OECD Regional Well-Being Index grants to the Basque Country a score of 10 points, the maximum possible, with an index of 0.5 homicides for 100,000 inhabitants. 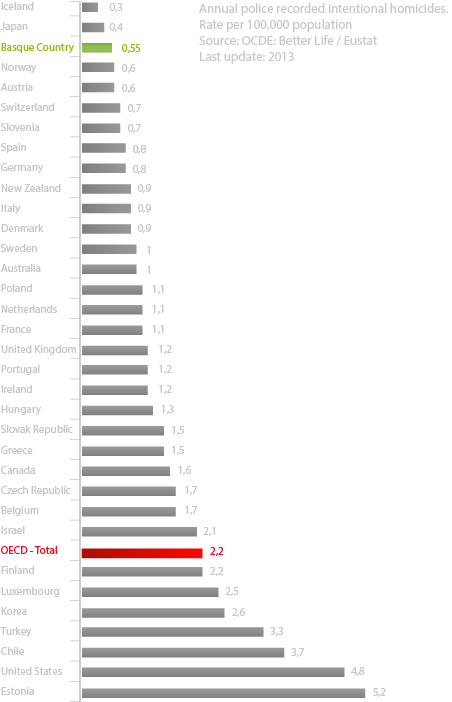 Employment, incomes, housing, community, education, labour-personal balance, environment, citizen participation, health, satisfaction for life and safety are the most valued aspects by the citizens through this tool in which more than 60,000 users have participated until the date and which tries to quantify their level of well-being.

According to these results, we can assert that there is a notable quality of life in the Basque Country, a fact that is reflected in the high longevity of its population that exists in all its provinces. 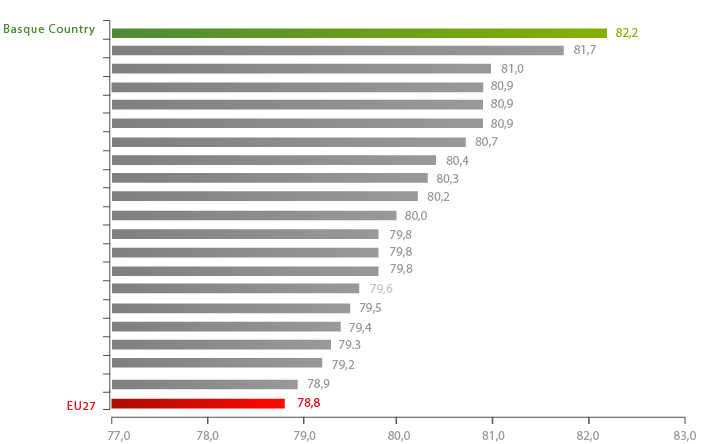 Besides, the studies show a tendency of growth in the quality of life, that in the case of women reaches to 87.3 years old and in men 81.2, according to the Demographic Plans 2020 made by the Eustat.

With regards to the economic sphere, the Basque Country also holds a distinguished situation in the OECD indexes. This way, with a net income per household of more 29,000 euros, it is situated at the level of countries like Austria, Germany or France, and only under Switzerland, Norway, Luxemburg and United States. 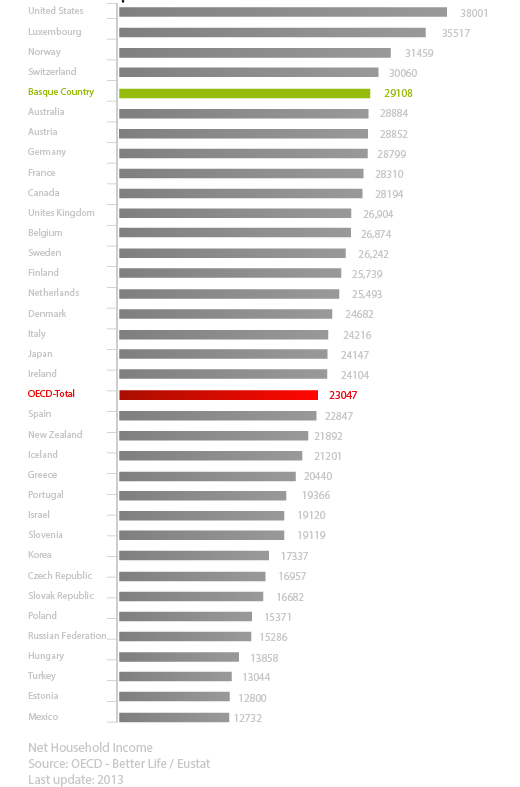 However, as we have pointed out before, not only economy influences in the happiness or satisfaction of the citizens about their quality of life. There are other factors, as free time and personal care, which are determinant to reach an optimum level of happiness.

Basque citizens, in general, enjoy a good balance between personal and labour life, which means more time for leisure and personal-familiar care. Thus, an average of 15.55 hours per week is dedicated to leisure time in the Basque Country. 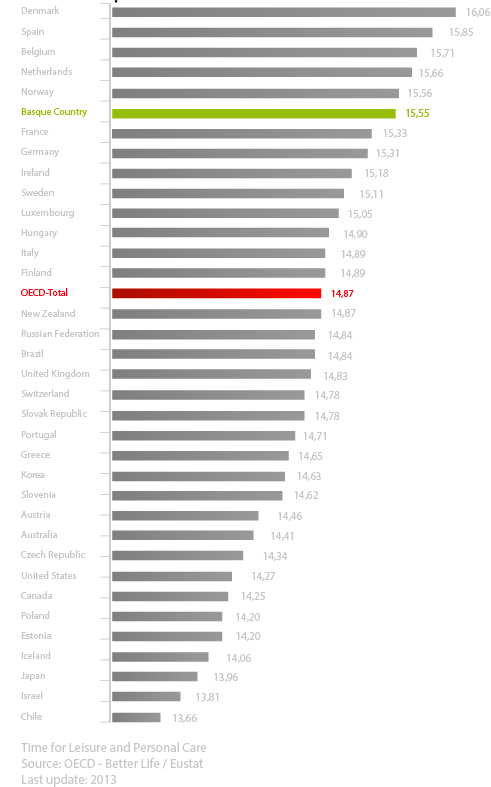 The Gini Index about social equality is also revealing, since the existing gap between rich and poor is one of the lowest in the EU, with a 25.3 percent and only below Sweden (24.4), as reflected by Eurostat data. 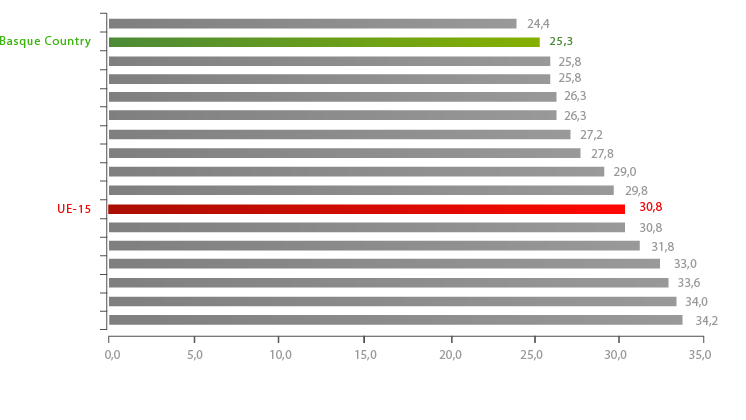 Therefore, the constant reduction in inequality, the search for the socio-labour balance, the sustainable economic development, the encouragement of the civic participation, the establishment of a quality education and health or the creation of an innovative business network, among other factors, should be harmoniously combined to create a satisfied society with a high quality of life, which is always a priority in the Basque Country.