It is quite difficult (maybe we should say impossible) to talk about sports in the Basque Country without mentioning how much the Basque people like hiking and mountaineering. This is probably the result of the peculiar geography that characterises the Basque country.

As a matter of fact, some of the greatest climbers of the past few decades are Basque, like pioneers Antxon Bandrés Azkue, Andrés Espinosa (the first man to climb the Mont Blanc and the Kilimanjaro on his own, in 1929 and 1930, and the first Basque climber to reach the Himalayas) and Ángel Sopeña Orueta (who crowned the Naranjo de Bulnes in 1925 wearing espadrilles).

Contemporary mountaineers include Emilio Hernando, Juanjo San Sebastián, Juanito Oiarzabal and Alberto Iñurrategi (who have conquered the summits of all 14 eight-thousanders), Xabier Ormazabal Aristegi (the first climber from the Spanish State to be granted the Snow Leopard, a Soviet mountaineering award given to the men and women who summit all five peaks of 7,000m in the former Soviet Union) and Jon Beloki. A Basque woman is also among the world’s greatest climbers. She is Edurne Pasaban, from Tolosa, and she is the first woman ever to have crowned all the eight-thousanders.

All of these names are associated with the most impressive climbing achievements. But the Basque Country has lots of peaks and trails to offer to those whose aspirations are not so high but still love the mountains.

The Gorbeia (1,481m) is the highest peak in Biscay and Araba, standing on the border between the two Historical Territories. The Gorbeia Massif features several interesting peaks: Siskina (855m), Harrikurutze (852m) and Korroskobilla (806m). One of the best known routes starts in Ubide, the highest village on the Arratia valley. It covers 10.5km, the average elevation gain being 490m. The climbers who reach the summit have the chance to see the 18m metal cross that has been photographed by thousands of climbers from around the world.

The Pagasarri is Bilbao’s most popular mountain. Although it is not the highest peak in the Ganekogorta Massif (673m vs. the 689m mount Ganeta), it can be easily accessed from the city. The climbing route is quite easy, taking less than 2 hours to complete. Accessibility and low difficulty are what attracts so many mountaineers to the Pagasarri. 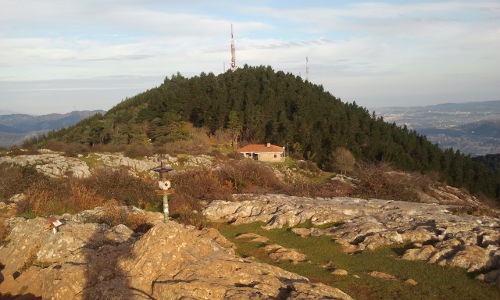 The other well-known mountain in Bilbao is the Artxanda. Being only 250m high, it is one of the city’s most important green areas, drawing hundreds of hikers on weekends. The route to the top is less than 7km long, and it is easy. Taking the Arenal as both starting and finish point, it can be completed in 90 minutes, with the bonus of some of Bilbao’s greatest attractions: Paseo de Uribitarte, Euskalduna Conference Centre and Concert Hall, Guggenheim Museum, La Salve Bridge, and others. In addition, the viewpoint by the funicular railway (which you can use for a more relaxed ride to the top) affords amazing views of the city.

On the left bank of the river Nervión, mount Serantes (451m) is a natural viewpoint affording spectacular views of Biscay. The climbing route is 10km long and takes about 1 hour, starting at the Santurtzi Town Hall.

On the opposite bank, an 8km route (about 2 hours) connects Sopelana with Algorta. Beginning at the parking lot on Barinatxe Beach in Sopelana, the trail runs parallel to the coastal cliffs, amidst fabulous vistas. At the Punta Galea Lighthouse, hikers can see the huge Port of Bilbao. A few minutes later, the Aixerrota Mill becomes visible.

Anboto, a tough one to beat

Mount Anboto (1,331m) can be viewed from many different parts of the Historical Territory. There is more than one route to tackle it, the most scenic being the one across Urkiola Nature Park. 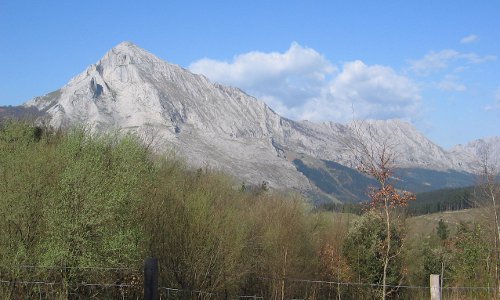 Part of Sierra de Aralar, the Txindoki – also known as ‘el Cervino Vasco’ (the Basque Deer) due to its crest on the western side – is 1,346m high. The way to the top from the shrine of Larraitz (a usual starting point) covers 11km. It is not very long, but it is rugged and tough, with a total elevation gain of 922m. The most difficult stretch to negotiate is the last 50 metres.

The Pyrenees: a must for climbing enthusiasts

The Pyrenees – the 435km mountain range on the border between France and Spain, are a must for Basque mountaineers. If offers all kinds of routes, from short and sweet like mount Erroilbide (832m) in the Aiako Harria Massif to long and exacting like the  Aneto, the highest peak in this range (3,404m).

The Hiru Erregeen Mahaia (a Basque name meaning ‘Three Kings’ Table), in the Navarra Pyrenees, is the highest mountain in Euskal Herria (Basque Historical Territories), rising 2,444m above sea level. It used to be the meeting point of the old kingdoms of Navarre, Aragon and France (hence the name). Also known as Techo de Navarra (Roof of Navarra) for obvious reasons, it is one of the trickiest mountains to climb in Basque territory. The route to the top covers 17km with an elevation gain of 1,100m. The summit can be reached in about 7 hours.