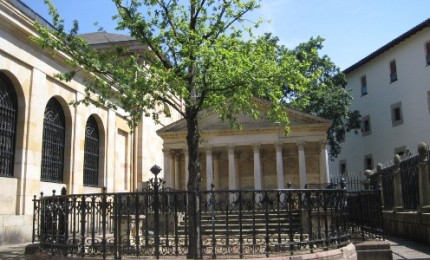 The Tree of Gernika: A symbol of Bizkaia and the Basque people

Standing in the heart of the site of Assembly House of Bizkaia, in the municipality of Gernika-Lumo (region of Busturialdea, part of the Urdaibai Biosphere Reserve) Gernikako Arbola, the Tree of Gernika, is one of the best-known symbols of the Basque Country.

In the past, this tree was a silent witness to many of Bizkaia’s important historical events. Today, it continues to play a major role in the political life of the Basque people, for it is the place where the Lehendakari (President of the Basque Government) and the General Governor of the Historical Territory of Bizkaia take office.

For centuries, the ancient oak sheltered the Lords of Bizkaia, who swore to respect the liberties and the privileges of Basque people (old law), as agreed upon with the kings. The Lords met in its shade to discuss the issues concerning the region of Bizkaia, which comprised the flatlands, the fields and the hamlets, the so-called anteiglesias (districts developing around a church), the villages and the city of Orduña. With time, other regions were annexed, like Las Encartaciones and Duranguesado.

The tree has become a symbol of the history of Bizkaia and Basque society at large. It stands for the traditional liberties of the Historical Territory and the citizens living in it, and, by extension, the rights of the Basque people at large.

The tree we can see today was replanted on the site of the old one in 2004, which died of a disease caused by a fungus. The old tree, planted in 1742 (whose trunk can still be seen in the Assembly House), replaced the original tree, the ‘father’, when it dried out. In 1860, the old tree was replaced by the ‘son’, one of whose cuttings is the tree standing today. The father tree is the oldest tree on record, dating back to the fourteenth century.

The Tree of Gernika is a graphic symbol as well, depicted in the coat of arms of Bizkaia, of the Historical Territory that appears in the first edition of the legal statutes. 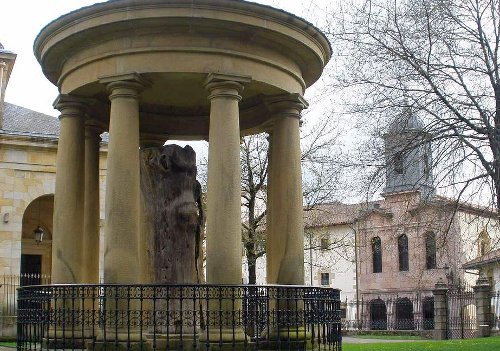 The liberties of the Basque people

In the days of the Carlist Wars, back in 1853, the Basque bard José María Iparraguirre wrote a song, ‘Gernikako Arbola’, celebrating the tree. The song soon became an anthem, sung by those who advocated the liberties of the Basque people against the attempts to curtail them after the French Revolution. They were turbulent times, and the song – and, with it, the tree – soon took up a symbolic dimension, going beyond the protection of regional liberties to stand for Basque sovereignty.

Gernika is one of the villages most closely associated with the essence of the Basque people and their fight for freedom. Founded by Count Tello in 1366, it earned itself a place on the map of world history for the infamous bombing of the Condor Legion of Nazi Germany’s Luftwaffe on 26 April 1937, during the Spanish Civil War. It was the first ever attack against civilians during an armed conflict. The Germans were attacking to support the efforts of Francisco Franco to overthrow the Spanish Republican government. It was an aerial bombing with unprecedented consequences. Gernika was devastated, but both the Assembly House and the traditional oak survived. This strengthened the tree’s symbolic value and its connection to the Basque people.