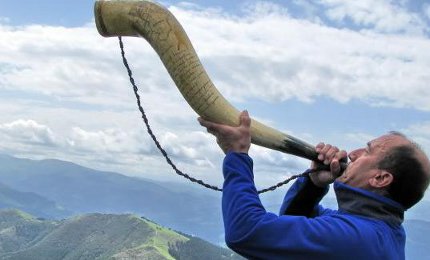 Montes bocineros: a call to the past

The so-called ‘montes bocineros’, or ‘horn mountains’ (in Basque, Deiadar-mendiak), are five peaks in Bizkaia that were used to announce General Assemblies in the region of Bizkaia with horns and lights. These peaks – Kolitza, Ganekogorta, Gorbea, Oiz and Sollube – are visible everywhere in Bizkaia, each belonging to a different merindad (administrative division).

The first mount where the horn was sounded was the Gorbea. Then, all other four echoed the warning. When villagers heard the call for citizen participation, they knew that, in the next moon phase, a General Assembly would take place.

Origins of this tradition

This tradition dates back to the Middle Ages, when the General Assemblies were held at the Assembly House in Gernika. They were meetings with normative power over the Basque territory of Bizkaia and their main tasks were legislative, law being to a great extent customary.

Since the villages were scattered across the territory, the horn mountains played a key role as an effective means to call for a new General Assembly.

Gradually, the horn mountains fell into disuse, as the bells in chapels and parish churches began to be used for the same purpose. Later, representatives were elected to attend the meetings and the calls were written documents. In the seventeenth century, the sound and light signals in the mountains were no more than a past tradition.

In 2004, on the 25th anniversary of the restoration of the General Assemblies in Bizkaia, the five horn mountains came back to life. Every year, one of the peaks is chosen to announce the Day of the Horn Mountains, an event gathering mountaineering enthusiasts and people interested in Basque customs and traditions.

Strategically located in the Historical Territory of Bizkaia, the horn mountains are five. The Kolitza is 879m high; it is located to the west, in the area of Las Encartaciones. The Ganekogorta (998m) is in central Bizkaia, in the municipality of Alonsotegi, a pebble’s throw from Bilbao. The Gorbea (or Gorbeia) in the area of Arratia-Nervión, in the south, is 1,482m high. Mount Oiz (1,026m) stands in the east, overlooking the Duranguesado, Lea Artibai and Urdaibai. Finally, mount Sollube, standing above Bermeo, Urdaibai and Txorierri, is 686m high.

Kolitza was the mount chosen in the area of Las Encartaciones to sound the horn. Being 879m high, it belongs to the Ordunte mountain range. Its peculiar, peaky summit dominates the town of Balmaseda, rising over a gorge whose vertigo-inducing chasm channels the river Agüera.

The summit houses the Shrine of San Sebastián and San Roque, one of the few Romantic shrines in the Historical Territory and one of the most popular across Bizkaia. 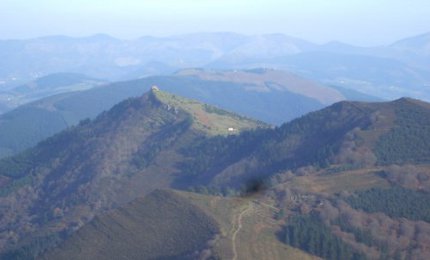 Ganekogorta, a pebble’s throw from Bilbao

The Ganekogorta is the mount in Greater Bilbao. With 998m in height, it is one of the highest mountains surrounding the city. Its Basque name means ‘pasture at the top’. The Ganekogorta was home to Basque mountaineering in the late nineteenth century; in fact, the earliest mountaineers’ association was established in the area in 1870.

The summit includes three distinct peaks: Biberdi (871m), Ganekogorta in the centre and Galarraga (901m). Although the mount belongs entirely to the Historical Territory of Bizkaia, the boundary with Araba is only 69m from it.

Gorbea, the roof of Bizkaia

The Gorbea (or Gorbeia in Basque) is the highest of the five horn mountains. Being 1,482m in height, it stands high above the other mounts in its range.

Since 1899, the summit has been crowned by a 17.23m metal cross, the Gorbea Cross, which can be seen from every point in Arratia-Nervión. Its four arms point to the four points of the compass. At its foot there is a statue of Our Lady of Begoña, the Patroness of Bizkaia. The Gorbea Cross has become a mountain icon, attracting lots of visitor every year.

On the border between the municipalities of Zeanuri in Bizkaia and Zuia in Araba, the Gorbea can be accessed from all four sides. It is surrounded by a magnificent natural area that has come to be Gorbea Nature Park.

Oiz, a lookout on Bizkaia

Mount Oiz, which locals refer to as ‘the viewpoint of Bizkaia’, is one of the iconic mountains in this Historical Territory. The views from the summit seem to be boundless, courtesy of the mount’s privileged height and location. Together with the Zengotitagane, the Oiz is part of a longish range whose waterways flow into some of the rivers of the Cantabrian basin, like the Ibaizabal, the Artibai, the Lea, the Oca or the Deba. 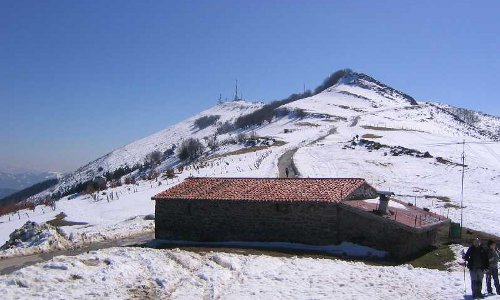 The Oiz is a key point in the history of the Basque Country, for its slopes are peppered with prehistoric sites. According to legend, the Oiz is one of the homes of Mari, Mother Earth in Basque mythology.

The Sollube, also known as ‘the viewpoint of Urdaibai’ is the smallest of all horn mountains, only 686m in height. Standing close to the seashore, it lies in the municipality of Arrieta, with part of its slopes in Bermeo, on the border with the Urdaibai Biosphere Reserve. It used to have a strategic location in the region of Bizkaia.