The Provincial Council of Bizkaia presents its Employment Plan 2015 which expects to help create 2,225 jobs 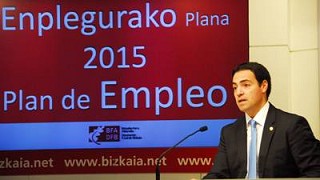 The Employment Plan for 2015 of the Provincial Council of Bizkaia prioritizes the promotion of quality employment for young people, employment for the long-term unemployed and self-employment.

This plan has a budget of 19,270,000 Euros, which will be distributed between the promotion of employment (13.7 million Euros) and the promotion of talent (5.5 million Euros). The targets of the Plan for 2015 establish at 2,225 the number of jobs created and at 1,300 the number of people who will participate in the programmes to improve employability and promote talent.

There has also been an 11.1% increase in the amount allocated to the LanBerri programme, which is specifically aimed at the long-term unemployed and positively discriminates those who are older than 45.

As for the third of the priority axes of this plan, the promotion of self-employment, it will be allocated 6,000,000 Euros.

Download all the modes of the REGIONAL EMPLOYMENT PLAN 2015.