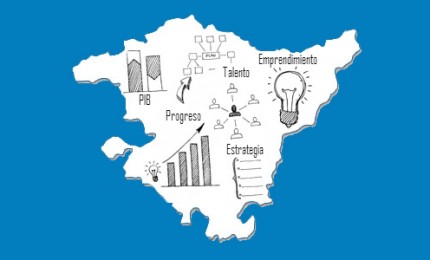 Competitiveness has had a positive evolution over the past decades in the Basque Country. The social and economic situation our country has been through somehow spoiled this transformation in the need to adapt the production system to be able to go through economic uncertainty.

The Competitiveness Report for the Basque Country 2013, the fourth report of this kind published by the Basque Competitiveness Institute (IVC)-Orkestra, underscores the huge potential of the Basque business fabric and the sound pillars the Basque economy rests on, while also highlighting the need to make changes in the production system – a key element on the path to economic growth.

The Basque economy has shown it can stand on its own during a long recession, macroeconomic indicators being better than the European average and with no significant differences with the leading regions in Europe, according to data published by the Basque Competitive Institute.

In 2013, the Basque Country was the region in the Spanish state with the highest GDP per capita, being 34.5% than the average for Spain, according to the Spanish Institute of Statistics (INE).

Likewise, the Basque Country is among the regions with the largest export volume in the Spanish state: €10,947M in the first half of 2014, vis-à-vis imports for €8,562M. This translates as 5.4% y-o-y growth and a 9.2% share in total Spanish exports (with a 4.5% population share). This means that the Basque Country is the second region in Spain in terms of export volume, having a quite a fat margin for growth according to a report drafted by the Ministry of Economy and Competitiveness.

Even though these figures show the Basque Country’s steady progress and optimal position in terms of business competitiveness, a transformation is required in the production system to improve the wellbeing of citizens and increase job creation.

The first report from IVC-Orkestra, published in 2007, already urged to initiate the transition ‘from an efficiency-oriented to an innovation-based model.’ The 2013 report, in turn, emphasises six ‘levers to boost competitiveness’ that are meant to contribute to the economic and productive transformation of the Basque Country, helping solve situation-dependent problems and ensuring long-term sustainable economic development.

1. Smart Specialisation Strategies (RIS3) based on key enabling technologies (KET): The major KETs Basque S3 are based on are advanced manufacturing, energy, the bioscience-health binomial (biotechnology and nanotechnology), and ICTs. The Basque Country is working on a Science, Technology and Innovation Plan (PCTI 2015) to boost these technologies.

2. Knowledge infrastructure and R&D: According to the IVC-Orkestra report, the Basque Country is still among the 20% regions with the largest expenditures in research. In fact, it has a world-class technology centre network (BERG and CIC) whose main challenges are opening to international markets and fostering cooperation between its members.

6. Energy: Energy is a strategy sector in the Basque Country because of growing consumption and interesting demand, productivity and technology prospects. The structure of the Basque energy sector rests on the extension of electricity and gas infrastructure, and on the concomitant flexibility in sources of supply.

The Basque Energy Strategy (3E-2020) sets a priority goal for the energy sector: focusing on RIS3, which are capable of great diversification and specialisation, their implementation and related facts being described in the EnergiBasque Strategy.

In sum, competitiveness can be understood as stretching the social and economic fabric at large, including business and study and research centres. The search for new markets (meaning openness and cooperation with local companies to identify businesses with bright growth prospects rather than delocalisation in pursuit of lower labour costs) is in this regard a key goal.